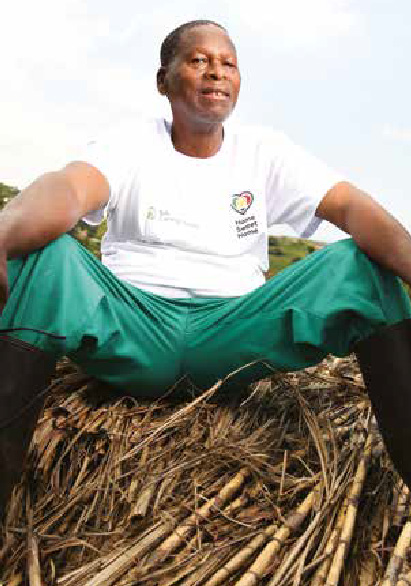 The South African Sugar Association (SASA) values the significant role that the rural economy in general and emerging cane growers in particular play in the broader South African sugar industry. Hence, they jumped into action when they heard of the IDC’s Post-Unrest Business Recovery Fund aimed at assisting businesses and enterprises adversely affected by the July social unrest.

When the Mill in Southern KZN was forced to shut down for 3 weeks in July due to the social unrest, this had a compounding effect on nearly 200 small, medium and large sized local cane growers. So, it was almost 2 months before the small and medium cane growers could gain access to the Mill and drop off their harvest. The affected local cane growers in the Southern KZN areas of Umzinto and Umdoni are fortunately organized under a local umbrella support body.

A representative of the local association helped gather information on the extent of the damage and need for help by the affected local cane growers. He had at most a day-and-a-half to contact all the affected cane growers in the area, as his deadline for application submission was looming. He visited each farm to assess the damage and collated the necessary data for the IDC’s PUBR Fund Application.

When the local representative visited a small cane grower in Malangeni, Mr. Ngubo, he told him that he was hoping time could stand still, as his cane was ready for harvest and he feared that once harvested, it would not get to the Mill on time. He tells us that cane loses its quality with each day, and eventually rots if it is not crushed on time. Time is money for Mr. Ngubo who has spent 12 months preparing the soil and growing the cane. When he heard that the Mill was shut down he knew that his year of hard labour was in vain. He knew he couldn’t make up for lost time and thought he would
suffer a heart attack.

To his pleasant surprise someone from the local association came knocking on his door offering to assess the damage of the rotting cane, so that he could be compensated. He is now ready to roll up his sleeves, get his hands dirty and plough his land in order to make up for lost time.

87 year old Mrs. Patricia Mbele, affectionately known as ‘Gogo’ by her employees, was watching the news when she heard of the unrest. She was not aware that her cane in Malangeni, Umdoni had been set alight by the looters. She couldn’t fully comprehend the magnitude of the loss, as she was also coming to terms with her son’s sudden passing.

Gogo has run her farm since the 70’s and has had her fair share of ups and downs. When the local representative and his team came to see her, she thought they were there to pass their condolences, but instead “they were heaven sent to help me during my darkest moment,” exclaimed Gogo.
She wants to make her son proud, by staying strong and rebuilding her farm. She is ready to go buy the necessary fertilizer, pesticides and get her employees back out on the field.
She says that she is grateful to God for answering her prayers for help.

Further south is Mr. Wiseman Njikija, in Umzinto who runs Idwala Farms, a large scale farm, with his son Sipho. He woke up in the early hours of the morning to see his farm in flames. It was his son who contacted the local association to inform them that the cane had been burnt and that they wouldn’t be able to meet their deadline to deliver cane to the Mill.

He says that they lost over half-a-million rands worth of cane and they were worried about how they would be able to pay their employees and also how they would survive as a family.

Sipho says that he is grateful for the IDC’s timeous funding and hopes to make his father proud by restructuring the running of the farm and making sure that it yields even greater returns in the new year.