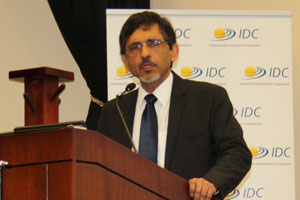 Presenting his keynote address at the inaugural IDC national youth conference which started this morning at the Gallagher estate in Johannesburg, Mr Patel called for closer working partnerships between the youth and state institutions tasked to spearhead government’s job creation plans.

Acknowledging the challenges facing youth entrepreneurs, Patel cited the lack of information on funding opportunities, poor technical support, and bureaucracy as some of the biggest impediments preventing SA’s youth from contributing meaningfully to local economic development.

“Trends across the globe point to new technologies and burgeoning businesses which are being run by young entrepreneurs. Even in our country, young people represent an enormous opportunity for us to grow and transform our economy. We have IDC, sefa, NEF and the dti officials in our midst and these people are not here to listen to speeches but are here to close deals,” remarked Patel to which IDC CEO, Mvuleni Geoffrey Qhena agreed.

Given the capital constraints facing entrepreneurs, Qhena prodded the youth to generate and pursue innovative ideas that would easily resonate with funders. “Just this morning, I met a young entrepreneur, Gomolemo who in our chat and not knowing who I was gave me what I thought was a simple yet remarkable business concept called Relocate.”

Looking to spread its presence across the country, Relocate’s business strategy is focussed on managing the logistical aspects of families or individuals relocating from one another part of the country. “Unless you have relocated before, many of us don’t know the challenges associated with relocating. I’m hoping Gomolemo becomes one of the youth that will be able to land themselves a deal at the end of this conference,” said Qhena.

Despite a challenging economic environment and tight opportunities, Mr Patel yet again applauded IDC for approving R970million in 19 transactions for entities in which youth held shareholding of more than 25%. “We can do more than this but the mere fact that this was achieved in 12 months (2016 IDC financial year) is reason to be proud.”  said Patel.