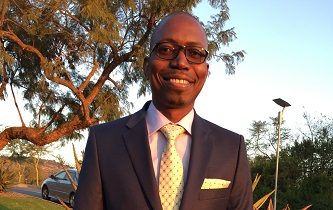 His calm demeanor and attention to detail are just some of the most striking qualities that Daniel Sadiki possesses- evident at least in the many accolades he is showered by IDC clients and some of his colleagues.

“Working for the IDC requires professional commitment which is not associated with your usual 8-5 job. I always say that it’s a calling in the sence that one wakes up every morning with the sole purpose of wanting to make a difference in the lives of ordinary South Africans and to the IDC, regardless of changes,” says Sadiki.

Perhaps Sadiki is more practical to this calling sometimes even going the extra mile to clock more hours at work just to keep the IDC cog turning. Although he has been identified as one of the most hardworking employees in the IDC stable, he is modest about this recognition. Sadiki says it takes great team work to achieve positive results and therefore he alone can’t take credit for the good reputation that the corporation enjoys among some of its clients.

Without a doubt, Sadiki is deserving of the 2016 Star of the year title that he scooped in recognition of his hard work, dedication and commitment to the IDC.

“Sadiki is a rare talent as he is able to balance both IDC and client interests. He is a highly skilled and knowledgeable individual, he is dedicated, capable and willing to go the extra mile. He really perseveres and is diligent in his work. Most important though, he is self-driven and motivated,” remarked IDC CEO Mr Mvuleni Geoffrey Qhena shortly before he awarded him the 2016 star of the year accolade.

He was born and raised in Thohoyandou in Limpopo Province where he spent most of his childhood as a herd boy.

Sadiki is a qualified Chartered Accountant [CA(SA)], with an Honours Bachelor of Accounting Sciences (Honours BCompt / CTA) from the University of South Africa (UNISA). He also holds among other qualifications, a Higher Diploma in Tax Law (H. Dip Tax Law) from the University of Johannesburg; and a Master of Business Leadership (MBL) from UNISA’s Graduate School of Business Leadership (SBL).

Prior to joining the IDC, Daniel was a Corporate Credit Manager at Nedbank Group Limited, where he also did his TOPP Articles. He also served in the similar role at ABSA Bank.