A delegation led by CEO Mvuleni Geoffrey Qhena got to see how far IDC funding can go when they paid a visit to an industry-leading factory in North West province. 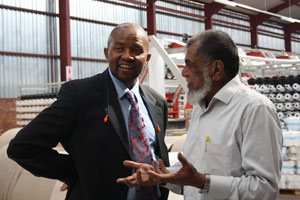 In a recent visit to a mid-size manufacturing company based in North West Province, IDC CEO Mvuleni Geoffrey Qhena got first-hand experience of the impact of IDC funding on job creation.

The IDC opened its first office in the province in 2008, and has since grown its exposure in North West from R1.4-billion to R6.2-billion, in the process creating more than 20 000 direct jobs in mining, agro-processing, metals and tourism.

The IDC’s partnerships with commercial banks, business chambers and government departments in the province has been key to enabling the Corporation to stimulate local economic growth and job creation at an increasing rate.

Company started up with R5 000

IDC client and Brits Bag Manufacturers is a family-owned operation which delivers a unique packaging offering in a highly competitive industry. 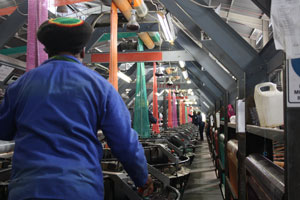 Chief Executive Mohamed Iqbal Tayob guided Qhena and his delegation through the factory, explaining how the company, started in the 1970s with an initial investment of R5 000, makes maximal use of polypropylene or plastic-based materials to service the agricultural, poultry and cement industries.

Growing the business had been a challenging journey that required “innovation, resilience and patience,” Tayob said.

When market demand shifted from paper to plastic packaging, the company responded by commissioning a new machine for its 25 000 square metre plant – a crucial step in its growth, made possible by funding from the IDC.

“The IDC’s funding has had an immense impact on the business,” Tayob said. “The new machine allows the factory to produce 150 000 lock-bottom bags each month for a client in the cement industry.

“More workers have been employed and the factory has created close to 800 jobs, a large portion of which is occupied by locals who reside in the area. This has had the multiplier effect of each worker being able to support four people within their household.”

Having covered a large chunk of the agricultural market in South Africa, the company has now expanded into neighbouring Botswana, Angola and Mozambique.

“The factory is currently in the process of sourcing new orders in the fertiliser industry,” Tayob said, adding: “It feels good to play a critical role in creating employment opportunities and contributing to the advancing of the economy.”