Finance Minister Pravin Gordhan had the tough difficult task of balancing the country’s budget during tough economic times. In doing so, he spoke of several business boosting measures. 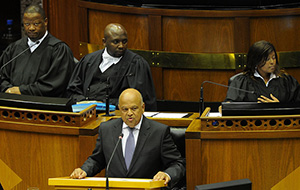 Finance Minister Pravin Gordhan had the tough difficult task of balancing the country’s budget during tough economic times. In doing so, he spoke of several business boosting measures.

Business support and empowerment ranked high on the list of priorities that government has set for 2016.

Delivering his 2016 budget to parliament, Finance Minister Pravin Gordhan revealed that steps to reduce the regulatory burden for business investors were progressing

These include the establishment of Invest South Africa as a partnership with the private sector and concerted efforts by our largest cities to reduce the administrative costs of starting businesses.

“A review of business incentives has been initiated, to strengthen their impact on growth, productivity, competitiveness, trade and competitiveness,” he added. Such moves are expected to have an impact on the Industrial Development Corporation, which runs various incentive programmes in partnership with the Department of Trade and Industry, including the Manufacturing Competitiveness Enhancement Programme and the Clothing and Textiles Competitiveness Programme,” said Gordhan.

In addition, Minister Gordhan said R475-million had been reprioritised to the Department of Small Business Development for assistance to small and medium enterprises and co-operatives.

Progress in agriculture, manufacturing, mining, construction, tourism, science and research, sport and leisure, trade and commerce was possible, but it needed action:

Gordhan was also candid about the weaker business confidence and the impact of the drought on the economy bringing with it rising prices and threats to water supply in many areas.

He outlined a number of budget proposals:

He also referred to the challenges presented by declines in global demand and prices of commodities, leading to lower export earnings and job losses; growth rates of below 1%; the effect of protracted labour disputes on business confidence; electricity supply constraints; and regulatory barriers to investment.

He however emphasised that the institutional foundations of the economy had remained resilient in the face of adversity.

“As outlined by [President Jacob Zuma], initiatives are in progress to address our policy co-ordination and implementation challenges,” he said.

Specifically, special economic zones and employment-intensive sectors with export potential have been prioritised for support by the IDC. The IDC is also involved in several of the other initiatives mentioned by the finance minister: the R9 billion investment in rig repair and maintenance facilities at Saldanha Bay; the renewable energy, coal and gas IPP programme; and, work on beneficiation initiatives, including titanium, fuel cells, fluorochemicals and composite materials.

“But our growth and development depends also on an expanding envelope of enterprise investment in industry, mining and mineral beneficiation, agriculture and agro-processing, housing, commercial development and tourism facilities. There are also initiatives in progress to reinforce financing of these projects.”

The IDC continued to play a leading role in financing manufacturing and beneficiation, Minister Gordhan noted. It planned to invest R100-billion over the next five years, including R23-billion set aside to support black industrialists.

The budget was “focused on fiscal consolidation. We cannot spend money we do not have. We cannot borrow beyond our ability to repay. Until we can ignite growth and generate more revenue, we have to be tough on ourselves”.

A central objective was to stabilise debt as a percentage of gross domestic product (GDP). To achieve this, the new budget framework set deficit targets for the next three years which were lower than the October Medium Term Budget Policy Statement projections. “Spending plans are reduced, a higher revenue target is set and net national debt is projected to stabilise at 46.2% of GDP in 2017/18, and to decline after that.”