President praises the IDC for doing a good job in a tough economic climate in his SONA, saying it provided finance “without fail” even in the aftermath of the global financial crisis. 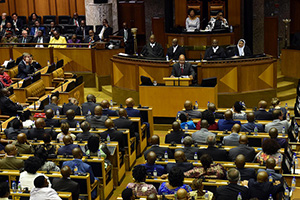 President Jacob Zuma has commended the IDC on its performance despite a challenging economic environment.

In his 2016 state of the nation address, the president reiterated the role of development finance institutions such as the IDC and the Development Bank of Southern Africa saying they had continued to provide finance for infrastructure, industries and agricultural development even in the aftermath of the global financial crisis.

In the wake of challenges facing state-owned companies (SOCs), particularly in the current economic environment, the president emphasised the need for SOCs to remain financially sound saying they had a critical role to play towards the implementation of the National Development Plan.

“They must be properly governed and managed. We will therefore ensure the implementation of the recommendations of the Presidential Review Commission on State-Owned Enterprises, which outlines how the institutions should be managed,” said President Zuma. Deputy President Cyril Ramaphosa chairs the committee, which is tasked with ensuring the implementation of these recommendations.

“We have to streamline and sharpen the mandates of the companies and ensure that where there are overlaps in the mandates, there is immediate rationalisation. Those companies that are no longer relevant to our development agenda will be phased out. Government departments to which they report will set the agenda and identify key projects for the state-owned companies to implement, over a defined period.”

The economy made up the core of the president’s SONA, in which he pointed out that a resilient and fast-growing economy was at the heart of the government’s radical economic transformation agenda and National Development Plan.

President Zuma, however, acknowledged that SA’s economy had been facing headwinds since the 2008 financial crisis prompting government to embark on an aggressive infrastructure development program to stimulate growth. “Our reality right now is that global growth still remains muted. Financial markets have become volatile. Currencies of emerging markets have become weak and they fluctuate widely. The prices of gold, platinum, coal and other minerals that we sell to the rest of the world have dropped significantly and continue to be low.”

Despite the challenges, SA remained an attractive investment destination a factor that chief executives drawn from cross sections of business had confirmed in meetings he held with them prior to the SONA address.  “We have heard the points about the need to create the correct investment support infrastructure. Government is developing a One Stop Shop/Invest SA initiative to signal that the country is truly open for business. We will fast-track the implementation of this service, in partnership with the private sector.”

On transformation and black empowerment, President Zuma said the two remained a key part of government’s economic transformation objectives. Government’s intervention in this regard is the Black Industrialists Scheme, which has been launched to promote the participation of black entrepreneurs in manufacturing.

“We urge big business to partner the new manufacturers, including businesses owned by women and the youth, as part of broadening the ownership and control of the economy,” said President Zuma.

The IDC is involved in this scheme and has earmarked R23-billion towards black industrialists in its bid to transform and accelerate economic development.  Supporting black economic empowerment has been central to the IDC’s mandate for the past 21 years. Over this period, the Corporation has provided R28-billion to black-owned businesses, and more than R53-billion for broad-based black economic empowerment generally.