The IDC responded to a challenging economic environment by approving R11.5-billion in funding for strategic projects across the country and the region in 2015, helping to save and create 20 388 jobs in the process. 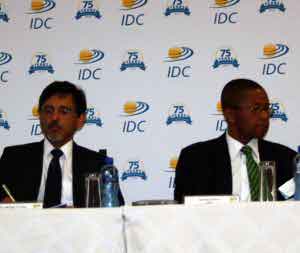 The IDC responded to a challenging economic environment by approving R11.5-billion in funding for strategic projects helping to save and create 20 388 jobs in the process.

Announcing the Corporation’s annual results in Sandton, Johannesburg on Monday, 14 September,Chief Executive Officer Geoffrey Qhena said the IDC had continued to deliver on its mandate to develop South Africa’s industrial capacity and facilitate job creation, despite a host of adverse factors.

In the course of the financial year ending 31 March 2015, the IDC approved funding to the value of R11.5-billion, while making disbursements – actual investments in the economy – of R10.9-billion.

This strong performance resulted in the approval of 210 individual transactions, up from 196 in 2013/14, and is expected to facilitate the creation of more than 14 000 jobs and the retention of almost 6 000 jobs that were at risk of being lost.

Qhena said the Corporation had responded in “a strong counter-cyclical manner” to the contraction in economic activity over the course of the financial year, particularly in manufacturing, which is a core sector for the IDC because of its importance for job creation, industrialisation and the development of other key industries in the country.

Manufacturing enjoyed the lion’s share of IDC funding, receiving 46% of the R11.5-billion in approvals and 47%, or R5.2-billion, of the R10.9-billion actually invested. Infrastructure development projects also benefited, receiving 34% of approved funding, while mining received 20%.

The IDC approved 85 transactions to the value of R5.9-billion in black-empowered and owned companies in 2014/15, including support for 41 companies controlled by black entrepreneurs.

At the same time, the IDC invested R756-million in businesses with women’s shareholding of at least 25%, and R159-million in similarly youth-empowered enterprises. And in partnership with its wholly owned subsidiary, the Small Enterprise Finance Agency, the IDC supported 1 300 SMEs, approving R3-billion in funding.

Creating the next generation of industrialists

“The approvals we made this year have been focused on key areas that will not only protect existing investments, but also help create the next generation of industrialists, targeting emerging black industrialists, women and young entrepreneurs and increasing localisation,” Qhena said.

“Our investments in black-owned and empowered businesses, as well as women- and youth-empowered enterprises, are part of our vision of a transformed South Africa where the industrial production capacity is fully representative of the demographics of the country.”

The corporation also approved R4.3-billion for projects in rural areas over the course of the year, particularly in the minerals beneficiation and high-value agriculture and agro-processing sectors.

And in support of regional integration for mutual benefit, the IDC increased its investments in the rest of Africa to R1.8-billion, with 10 projects across the continent benefitting.

IDC ‘required to take a much more active role’

Also addressing Monday’s results presentation, Economic Development Minister Ebrahim Patel acknowledged the tougher economic environment, saying this had required the IDC to play a counter-cyclical role, as it had done following the global financial crisis of 2008-09.

The IDC, Minister Patel said, had a critical role to play in the execution of the government’s job creation and growth plans.

“We foresee that the IDC will play a leading role in ensuring that there is sufficient and appropriate manufacturing capacity in South Africa to meet the needs of our local growth and development plans.”

For these plans to succeed, Minister Patel said, the IDC would need to take a much more active role in co-ordinating key industrial sectors across the economy.

“We are committed to investing in new infrastructure projects, but it is vital that South African businesses are integrally involved in supplying the materials for these projects. This is where the IDC, and its efforts to build South Africa’s industrial base, come to the fore.”

Chief Executive Qhena said that, as South Africa continued to face economic headwinds, the IDC would continue to play an active role, driving localisation and helping black industrialists to participate in the productive sectors of the economy.

Doing this effectively, he said, “will require partnerships with our clients, government and other stakeholders to build a stronger economy”.