The IDC will be channelling R23-billion towards black industrialists, giving fresh impetus to the Corporation’s drive to expand the benefits of transformation in the country. 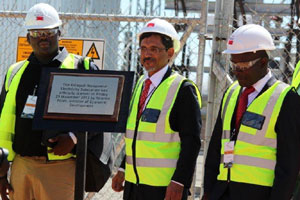 The announcement by Economic Development Minister Ebrahim Patel that the Industrial Development Corporation (IDC) will be channelling R23-billion towards black industrialists gives fresh impetus to the Corporation’s drive to expand the benefits of transformation in the country.

While B-BBEE remains part of the IDC’s mandate, however, its focus has shifted increasingly from facilitating BEE ownership changes to making more expansionary investments and supporting the creation of black industrialists.

Delivering his department’s budget speech in Parliament in May, Minister Patel said the IDC had dramatically increased the level of its industrial funding over the last five years, to R61-billion, and would be upping this to R100-billion over the coming five years.

This amount, he said, “will include R23-billion set aside to support and facilitate the growth of black industrialists in the productive sectors, and R4.5-billion each for women and youth empowered businesses”.

The Corporation’s funding for black industrialists will thus account for about 22%, or almost a quarter, of its overall budgeted investment for the coming five years.

It is also set to draw in double this amount of investment in black industrialists – that is, around R46-billion – from the private sector, on the basis of a ratio of R2 of private sector investment for every R1 of IDC investment that has been found to apply over the past decade.

Successful applicants, who need to be black industrialists who own and control their enterprises, will receive a 150 basis points discount on their loans from the IDC, with further incentives for entrepreneurs who meet targets related to jobs, localization and regional development.

Among those who benefited were a company that makes an innovative valve that reduces water leaks, a large black-owned and managed shoe factory, the black owners of a gas pipeline, and a new packaging paper mill to be built with 51% black ownership.

IDC Chief Executive Officer Geoffrey Qhena, meanwhile, in an interview with Business Day in July, said the Corporation was taking a more proactive stance, not only in identifying entrepreneurs worth funding, but also in helping them to become more competitive and raise their production levels.

“We need to be proactive. That means we need to engage more with existing and aspiring entrepreneurs,” Mr Qhena told Business Day.

As part of this proactive stance, the IDC would be engaging more both with government and with business to find ways to increase localisation, thereby reducing reliance on imports, while increasing exports, particularly exports to fast-growing African markets.

This would include working with state-owned enterprises such as Eskom, Transnet and the Passenger Rail Agency of South Africa to localise procurement for their infrastructure investment programmes

At the same time, Mr Qhena said, the IDC was talking to multinational companies about sourcing more of their goods locally. “Our guys are talking to the OEMs [original equipment manufacturers] in the automotive sector to see what parts can be produced locally. There are also talks with retailers to see what can be procured by them locally.”

In a briefing to Parliament’s portolio committee on economic development in June, Minister Patel defined a black industrialist as a black entrepreneur who created and owned industrial capacity and provided long-term strategic and operational leadership to the business.

Through its support for such entrepreneurs, he said, the IDC was identifying and developing the companies, and industries, that would be the cornerstones of the country’s economy in the future.