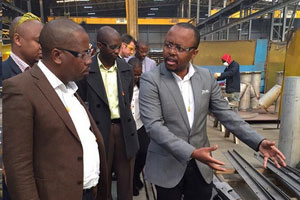 The state of the country’s manufacturing sector directly affects the government’s ability to achieve its transformation objectives for the economy, Deputy Trade and Industry Minister Mzwandile Masina said at the second annual Manufacturing Indaba in Ekurhuleni on Tuesday, 30 June.

Deputy Minister Masina told the high-level gathering of sector stakeholders and government decision-makers that the National Development Plan (NDP) aimed for high rates of economic growth in an inclusive economy built on a diversity of industries and an equitable redistribution of opportunities.

A revitalized manufacturing sector would allow for the creation of a higher number of jobs in the medium term. The deputy minister urged manufacturers sector to bear in mind the needs of the majority of South Africans as they work to restructure and revitalize the sector.

The NDP lays out a strategy to create depth in manufacturing through beneficiation that will realize the transformative potential of the sector. The objectives of economic transformation are related to building a productive asset base with growing capacity for the creation of high employment.

Breaking the ‘pit-to-port’ pattern of exports

By creating linkages between the primary and secondary sectors of the economy, South African manufacturers can beneficiate and add value to the country’s mineral and agricultural assets.

“We must break with the pit-to-port structure of minerals export and add value locally for the exportation of finished products,” Deputy Minister Masina said. “This will improve the scale of local production and will open up a wide chain of new industries and employment opportunities.”

This was the thinking behind the Department of Trade and Industry’s (dti’s) efforts to channel funding to enable more black industrialists to build sustainable businesses. The deputy minister referred to feedback from development funding institutions like the Industrial Development Corporation (IDC) indicating that black industrialists faced historical challenges that made it difficult for them to emerge and play a more meaningful role in the economy.

Black industrialists tend to have less equity investment or collateral, struggle to access start-up capital, and usually pay higher interest on loans than their peers. The R23-billion dedicated funding for black industrialists administered by the IDC is premised on the idea that they are unlikely to emerge without special support measures dedicated exclusively to them.

“It is in this context that we intend on using this Black Industrialists scheme to provide various support mechanisms to transcend these barriers to entry and growth,” Deputy Minister Masina said.

The importance of forging new partnerships

Beyond easing the path for new participants in the economy, transformation and growth is dependent on shared risks, shared burdens and shared long-term goals. “Success in fixing the economy and keeping it on a functional path requires a commitment by all social partners to undertake and fulfil certain commitments.”

For the manufacturing sector to become the engine on which a dynamic, transformed and growing economy is built, strategic partnerships will have to be built. The government will play a role in fostering a social compact between labour and manufacturers that will help improve their relationship.

The creation of global partnerships, meanwhile, will provide access to diverse markets that will help South Africa realize its ambitions. While Europe and, now, China remain important, the country needs to look to Africa for opportunities for growth as well.

“The market potential of Africa has hitherto been underutilized, and we have now pursued new regional partnerships to unlock this potential,” the deputy minister said.

Again, the IDC is playing an important role in achieving this. The Corporation’s mandate has always been industrial development within South Africa’s borders. However, in 1990 this was expanded to allow investment in the rest of Africa.

The IDC’s first venture was an aluminium smelter in Mozambique; now it funds projects in manufacturing, mining, telecommunications, tourism and agriculture across the continent.