The Presidential Youth Working Group will mainstream youth development in the work of government. 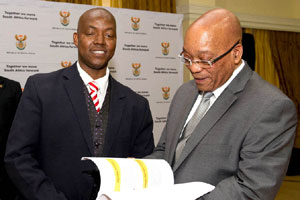 The recently launched Presidential Youth Working Group will mainstream youth development in the work of government.

“This group is also designed to enable young people to shape government policy by sensitising us to the impact of policies on the youth,” President Jacob Zuma said.

“In this way we are saying that youth development is now everybody’s business. It is not to be pushed aside. Every government department must ensure that its policies talk to youth development.”

President Zuma noted the feeling of exclusion suffered by young people who have never held a job or even earned an income and still depend on their parents. “The work to turn this around should begin now,” he said.

Top of the list of initiatives to turn this around is the capitalising on R2.7-billion that the Industrial Development Corporation (IDC) and the Small Enterprise Finance Agency (Sefa) have made available for funding youth-owned enterprises.

Second on the list is accelerating the implementation of the Youth Employment Accord.

The IDC was among the signatories of the Youth Employment Accord in Soweto in April 2013. Soon thereafter, the Corporation signalled its commitment to the Accord with the launch of the R1-billion Gro-E Youth Scheme, which provides loans of R1-million or more at prime less 3% to businesses that are creating new jobs in identified high-growth industries – and that are owned by people under the age of 35.

“It is important that we recognise the role that young people play in developing the country’s economy,” IDC Chief Executive Geoffrey Qhena said on first announcing the Gro-E Youth Scheme.

“Young people are very enterprising, but access to funding has been one of their greatest challenges.”

The government has also recently approved the National Youth Policy 2020, which outlines a range of initiatives to tackle youth joblessness, low skills levels, and other factors that alienate young people from their communities.

“We must work with young people themselves to turn the picture around,” the President said, adding young people did not want handouts but wanted to be enabled. “They want to be given ‘a hand up’. The initiatives to be prioritised by the Presidential Working Group should achieve exactly that.”