Manufacturing ‘the best vehicle for diversifying the economy’

03 Jul Manufacturing ‘the best vehicle for diversifying the economy’

A strong manufacturing sector is the best vehicle for diversifying the economy, and through this reducing poverty and inequality, Trade and Industry Minister Rob Davies said at the second annual Manufacturing Indaba in Ekurhuleni. 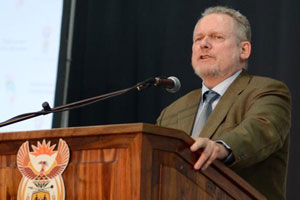 A strong manufacturing sector is the best vehicle for diversifying the economy, and through this reducing poverty and inequality, Trade and Industry Minister Dr Rob Davies said at the second annual Manufacturing Indaba at Emperors Palace in Ekurhuleni on Monday, 29 June.

The two-day conference brought together manufacturing stakeholders and municipal and government decision-makers to discuss the challenges facing the sector, at a time when the economy is under severe pressure and business confidence in decline.

In the 86 economic quarters since 1993, there have been just 16 quarters in which South Africa achieved 5% growth. “What were the factors that drove growth? They were consumer-driven cycles or growth driven by mineral super-cycles. These are not sustainable,” Minister Davies said.

Moving up the value chain

The Department of Trade and Industry (dti), together with its partners at the Industrial Development Corporation (IDC), want to diversify the manufacturing sector. For as long as the economy is based on exporting commodities while servicing imported goods, South Africa will remain stuck on a low development trajectory. For the IDC and the dti, the best way to grow a sustainable, diverse economy is by moving up the value chain.

Minister Davies went on to say that the manufacturing sector was the best vehicle for diversifying the economy as it was highly labour absorbing. Re-industrialisation was also a tool for promoting a more inclusive economy, and for this reason the dti was pushing for the emergence of more black industrialists.

While manufacturing growth was not the panacea for all the challenges facing the country, the minister said, it would contribute to long-term, sustainable economic growth, and was therefore a priority sector for the government.

He pointed to the revitalisation of existing Special Economic Zones, and the development of new ones, for example in Saldanha Bay on the south-western coast, where a new zone with an emphasis on the oil and gas service industry is being developed.

“The historic function of these zones has been industrial development, but they have languished in the doldrums for a while. But things are picking up again. The Coega Dairy is an example of a manufacturing sector project that is green and has created jobs.”

The IDC-funded Coega Dairy, based at the Coega Industrial Development Zone near Port Elizabeth, is one of the Corporation’s agro-processing success stories. It adds value to milk produced by emerging farmers in the Eastern Cape, and has created direct jobs for 220 people, of whom 30% are women and 80% are black. Through the Coega Empowerment Trust, the IDC is a minority shareholder in the project, with the farmers making up the majority.

Minister Davies said the revitalisation of the country’s economy, along with that of the region and the continent as a whole, faced challenges that were not all of its own making. “Yes, South African manufacturers occupy an environment in which energy shortages are a constraint, but they also face headwinds from the world economy, this we can’t deny,” he said.

‘All manner of niche markets exist’

At the same time, the minister had no doubt that there were opportunities in the South African market. “All manner of niche markets exist that can be investigated,” he said, pointing to the wine export market. In 1994, South Africa exported just 50-million litres of wine; by 1998, this had increased to 118-million litres, with the largest new markets being Scandinavia and China.

This growth was spurred in part by a R400-million IDC investment in the Western Cape wine industry. In 2000, IDC research noted that the industry was moving into better quality cultivars to compete internationally against other New World wine regions.

“There have been gains, especially in agro-processing. South Africa’s supply of wine to the Chinese market has grown substantially, but there remains a large untapped market still.”

Investors and industrialists make their own calculations when deciding on where to spend their capital, he said. When they look at mature economies, they see very low return on their investment. Africa and South Africa, by contrast, remain attractive destinations for institutional long-term investors. “South Africa continues to see robust foreign direct investment because we remain a good long-term bet.”

There was no doubt about the country’s capacity to fulfil this promise. “We can achieve it, we have to achieve it, and we have to keep working at it.”