The 25th World Economic Forum on Africa was the largest to date, reflecting optimism over Africa’s prospects and a commitment to tackling the continent’s challenges by means of public-private co-operation. 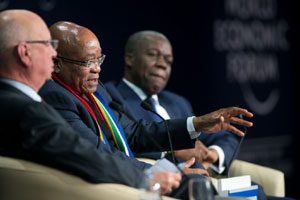 The 25th World Economic Forum (WEF) on Africa got under way in Cape Town on Wednesday, 3 June under the theme “Then and now: reimagining Africa’s future”. It ended on 5 June.

It was the largest WEF meeting in the region to date, with more than 1 250 leaders from business, politics, academia, civil society and the media attending. The forum meets every year to discuss the economic problems and possibilities of the African continent.

“As befits Africa’s youthful population,” said the WEF, “the meeting was attended by a record 200 young leaders, drawn from the forum’s community of Global Shapers and forum of Young Global Leaders, as well as the highest proportion of women leaders – with 270 woman leaders, 25.8% higher than ever before. In total, over 75 countries were represented.”

The record levels of participation reflect an optimism over the economic prospects of the region, according to the WEF, as well as an unprecedented commitment across all stakeholder groups to pursue public-private co-operation as a means of tackling the considerable challenges the region still faces.

“This year’s meeting will also feature a high-level session on critical subjects aimed at showcasing opportunities in Africa, which is one of the fastest growing regions in the world,” said South Africa’s acting cabinet spokesperson, Phumla Williams.

IDC chairperson Busi Mabuza took part in a panel entitled “Building Resilience to Global Risks”, which looked at how African businesses and governments could build resilience to systemic shocks. Themes tackled included identifying the global risks that would have the most impact on Africa, forecasting future scenarios and determining actions that would build resilience.

Speaking on the eve of the gathering, on 29 May, Elsie Kanza, head of Africa at the WEF, said: “What this meeting is really about is looking forward, to see how we can channel the lessons of the past with the creativity, innovation and resourcefulness that comes from all stakeholders working together to solve Africa’s challenges in the present and future.”

Hosted in South Africa, this year’s WEF on Africa was widely seen as an opportunity for South Africa to make its investment case to global and African business leaders as the country looks for ways to boost growth, alleviate poverty and reduce unemployment.

The programme included a plenary session with President Jacob Zuma and other leaders, moderated by WEF founder and head Klaus Schwab. South African ministers participated in key sessions during the meeting.

Speaking at the media briefing in Johannesburg on Friday, Minister in the Presidency Jeff Radebe said South Africa was regarded as one of the best foreign direct investment destinations on the continent, and continued to make strides in improving the ease of doing business with the country.

“South Africa values the importance and contribution that the WEF provides in creating economic opportunities for growth and development in the country and the continent,” Williams said. “The WEF on Africa will also showcase that South Africa is open for business.”

The Grow Africa Investment Forum, which started on Tuesday, 2 June, ran alongside the WEF on Africa, attended by leaders engaged in the WEF-led Grow Africa food security initiative.

The Forum represented the largest gathering of public and private-sector investors in African agriculture, set up to accelerate inclusive investment in the sector. Over 300 leaders of business, government, civil society, international organisations and farmer associations took part in the investment forum this year.

Over 200 companies within Grow Africa had committed US$10-billion (R123-billion) in investment to agriculture in 12 African countries, the WEF said on Tuesday. This represents an increase of 40% over 2013 commitment levels.

“The number of companies making investment commitments within the Grow Africa partnership and New Alliance for Food Security and Nutrition almost doubled, to 210,” the WEF added.

“Investment continues to increase: in 2013 and 2014, investments totalling $1.8-billion have led to the creation of 58 000 jobs, bringing improvements in services and market opportunities to 8.6-million smallholder farmers, who form the backbone of the sector’s production capacity. Around $300-million of staple and cash crops were sourced from smallholders in 2014 as a result of the investments.”

Grow Africa’s founding partners – the African Union, the New Partnership for Africa’s Development (Nepad) and the World Economic Forum – also took the opportunity to announce the transition of the Grow Africa secretariat from the WEF to an African base, hosted by the Nepad Agency.