The Kakamas Hydro Electric Power plant, the first run-of-river power scheme under the government’s renewable energy programme, was launched in the Northern Cape town of Kakamas on 3 March 2015. 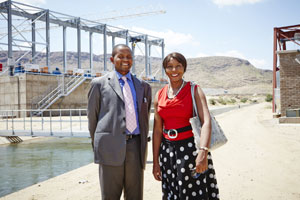 “Kakamas Hydro Electric Power has proved that when we put all our resources together as partners, we can achieve more than we can when we do it alone.”

These were the first words from Industrial Development Corporation chief executive Geoffrey Qhena at the opening of the Kakamas Hydro Electric Power (KHEP) plant outside the small Northern Cape town of Kakamas on Tuesday, 3 March 2015.

“This project will play a major role in contributing towards resolving the energy challenge faced by South Africa,” Qhena said. “Resolving power constraints was identified as one of the points in his nine-point plan by President Jacob Zuma in his State of the Nation Address on 12 February.”

Since going online on 31 January, KHEP has been generating up to 10 megawatts (MW) of electricity, enough to power as many as 5 000 homes. The project is a run-of-river design constructed at the existing Neusberg Weir, which feeds water to the Neusberg Power Plant.

The Industrial Development Corporation (IDC) provided funding support of R186-million for the project, which included a preference share facility of R20-million for the Kakamas Hydro Community Trust equity stake. “The total investment was R580-million. The IDC put in about 30% of the costs, enabling the community to own a 15% stake in the project,” Qhena said.

“The river supplies water to Northern Cape communities, but this river now also provides clean, sustainable energy to people around the country. This project will also help the upliftment of this community and bring job creation.” 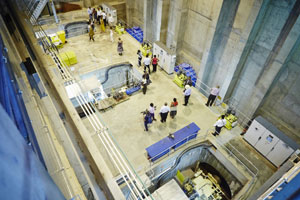 Hydro Tasmania’s manager of new markets, Christoff le Grange, said it was the largest mini-hydro plant developed under the REIPPP programme. “When operational, it will make history by being the first independent power producer to deliver clean energy via a run-of-river mini-hydro in South Africa.”

Qhena said the IDC was committed to industrial capacity development and that it would continue to make an impact on the lives of South Africans. “We play a significant role in encouraging global players to invest, bring in capital, and bring in new technology.”

While the IDC supported initiatives to boost electricity generation, it was aware of the need to remain cognisant of the environment, Qhena said. “Hence our involvement in renewables. The benefits include reducing the carbon intensity of the economy, removing constraints to the electricity supply, contributing to environmental protection and ensuring that we establish new manufacturing industries in South Africa, such as making solar panels.”

As part of the REIPPP programme, the IDC has participated in 22 successful projects, 13 of which are in the Northern Cape, amounting to a total investment of R13.5-million. A day earlier, the IDC and its partners launched the KaXu Solar One solar thermal electricity plant in nearby Pofadder.

“With this project, the Northern Cape is the second largest investment destination for the IDC after Gauteng, with about R16-billion,” Qhena said. “Of this, 75% is in the green industries, 17% is in mining and 10% in agriculture and agro-processing. There are indeed huge opportunities in this green sector, most particularly in the rest of Africa, since the continent is becoming the fastest growing in the world.” 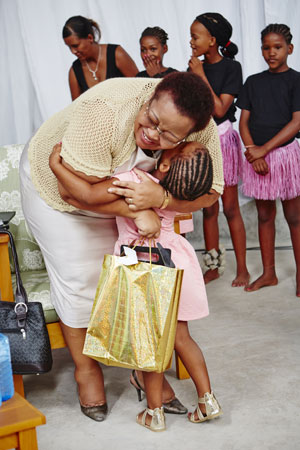 Bringing KHEP to operation was a joint effort of five years in the making, Christoff le Grange said.

Project manager Chris le Grange (no relation) said that design and engineering was done in Australia and France, and project and construction management in South Africa. The generators were from Brazil, the transformers from Turkey, the turbines from France, and the turbine cases from Johannesburg. “And the young, inexperienced engineers were trained by senior mechanical engineers during the job.”

Construction began on 8 May 2013, and despite various challenges such as inconsistent rock that made drilling “tricky”, was completed on deadline and within budget on 31 January this year.

With two teams working 24 hours a day, six days a week, the milestones laid down in the contract were met – without a single fatality. Some 152 local people were employed during construction, most of whom had never worked in construction before.

Mercia Grimbeeck, speaking on behalf of the local community, said the project was putting electricity into the ground, “and now we can plough back into the community … With a 15% shareholding, over the 20 years of the plant, we are looking at receiving R60-million. In rural South Africa, that is massively important.”

She added: “We must be proud of the skills transfers that we have done – people worked here who had never seen a construction site before. They have left better equipped to seek employment elsewhere.”