South Africa’s first solar thermal electricity plant – and the largest in the southern hemisphere – has been officially opened in the Northern Cape. 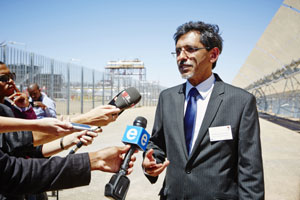 The arid region’s relentless sun is proving to be a valuable renewable natural resource that ultimately will benefit the local community, the country as a whole, and the environment.

“It is the result of partners working together. And it has demonstrated South Africa’s capabilities in converting the Northern Cape’s sun into a rich, useable resource,” said Qhena.

KaXu Solar One is the first solar thermal electricity (STE) plant in South Africa. It is also the biggest of its kind in Africa and the southern hemisphere. In opening the plant, Patel said: “Tonight, when ordinary South Africans put on their lights, put on their stoves to cook food, or watch television, some of that electricity would have been generated today near Pofadder.” 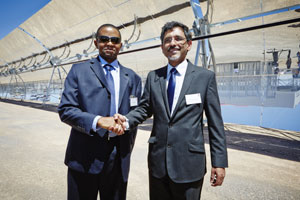 KaXu, which means “open skies” in the local Nama language, will add 100 megawatts (MW) of electricity from the sun to the national grid – the equivalent of about 320 gigawatt hours of electricity a year. “This is equal to the consumption of 80 000 houses, so serving more than 400 000 South Africans. In practical terms, this is the consumption of all the households in Mossel Bay, Oudshoorn, Knysna and Swellendam combined,” said Patel.

The plant covers an area of three square kilometres. It is made up of 1 200 collectors: each collector has 10 modules, each module has 28 mirrors, and in total there are 336 000 mirrors on the plant. The mirrors track the movement of the sun. Importantly, STE technology allows electricity to be stored for up to two-and-a-half hours, which means power can be supplied to the national grid when it is needed most – at peak time after dark.

And it saves 315 000 tons of carbon emissions per year, said Zuluaga.

Total investment in KaXu, the largest parabolic trough project in the southern hemisphere, was US$891-million, according to Javier Benjumea, president of Abengoa Solar International Advisory Board. “It will generate power when the sun has set. It also offers increased flexibility in terms of storage. It offers the same electricity without carbon emissions and that is a game changer.”

Qhena said the IDC recognised the key importance of the green economy, and had increased its focus in renewable energy as a means to reduce reliance on coal-generated power. 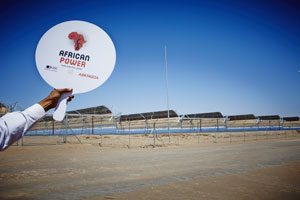 Developing the new industries had “facilitated job creation, the upliftment of rural communities, skills and industrial development,” he said. The IDC’s involvement had seen the industry become more competitive and attract interest from different players – demonstrating its role in de-risking the sector.

“We have also increased funding for small scale renewable energy initiatives through our Green Efficiency Fund. This ensures we are enabling manufacturers to cut their carbon footprint. When companies reduce the amount of electricity used in manufacturing while maintaining production levels, they increase competitiveness, improve employment and reduce costs.”

The corporation would continue to play a role in green industries, and extend this to financing projects in the rest of Africa. This was a major opportunity for the IDC in Africa, and “partnerships like this with the government and the private sector will assist this”.

There were massive benefits in supply chain in Africa, and the IDC was working tirelessly to ensure that South Africa benefited from industrial development, Qhena said.

KaXu has a capacity bigger than the installed capacity in the whole of Lesotho, said Patel, who also spoke about other initiatives: on 3 March, the Kakamas Hydro Electric Power plant will be opened on the Orange River, adding a further 10 MW to the national grid.

“On [5 March], Abengoa directors will fly to Johannesburg to sign the closure agreement for the beginning of the next solar plant – next door,” Patel said. “Xina will bring jobs to the community and bring power to the national grid and so help our country to build schools, build manufacturing and grow the economy.” 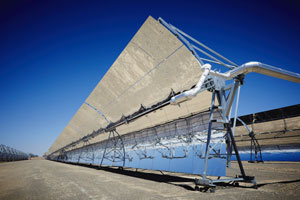 Already 33 renewable energy plants had been opened, Patel said, and by the end of the month there would be 1 685 MW of renewable energy available – almost equivalent to Koeberg’s entire output. “In 12 months we have been building plants that will generate almost as much as Koeberg. The difference is that Koeberg generates all the time.”

Coal had not been forgotten though, and Patel spoke of the synchronisation taking place at Medupi, South Africa’s new coal-fired power station, on the same day as KaXu’s inauguration. “Over the next few months, we will make sure the system is stable, and we will bring 800 MW of electricity into our grid. All of these are examples of the government working hard to solve the electricity problem.”

The total investment in KaXu came in at R7.9-billion, with about R1-billion coming from Spanish group Abengoa. The balance was supplied by the IDC, Nedbank RMB, the Development Bank of Southern Africa and the International Finance Corporation.

An important benefit is the value of the project to the rural area of Khai Ma. During construction, 4 500 jobs were created, 80% of them local. Now during operations there are 80 permanent jobs, and South Africans are being trained to run the plant.

Through the trust, the dividends would be invested in long-term projects that would benefit the community for generations to come, said Fadiel Farao, chairman of the KaXu Community Trust. Projects would be in education, health, and skills development.

“Big projects come and go,” said Patel, “so we must see that they create something out of it so that generations to come can be helped.”

The life of KaXu is 20 years, but there is an emphasis on growing local manufacturing of the components, which will allow the country to build a solar power manufacturing sector. “We pay more for renewable energy, so we must have a better return,” said the minister. Renewable energy used to cost 100% more than coal-fired power; now that cost had dropped to 50% – and this was dropping all the time as more companies invested in new technology.

In conclusion, Patel said that a project like this made a positive contribution to the sustainability of life on planet. “If we burn coal and petrol all the time, we damage the environment and will kill opportunities for our children and the next generation. We can’t destroy the earth to grow our economy. Renewable energy is a bit more expensive, but we have to invest in it. Because we use the power of the sun, it doesn’t cause damage to our environment.”