State of the Nation: energy top of 9-point intervention plan

Resolving South Africa’s energy challenge is the first order of business in a nine-point plan to ignite growth and boost job creation that was announced by President Jacob Zuma in his 2015 State of the Nation address. 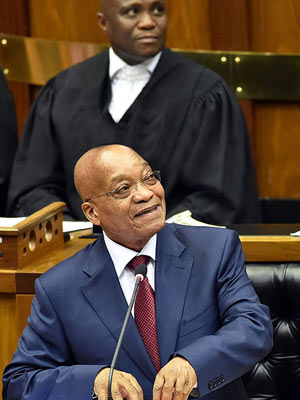 Resolving South Africa’s energy challenge is the first order of business in a nine-point plan to ignite growth and boost job creation that was announced by President Jacob Zuma in his 2015 State of the Nation address.

Advancing minerals beneficiation and manufacturing also featured high on the list of priorities, while Operation Phakisa – a sector-focused initiative to accelerate implementation of the National Development Plan (NDP) – was singled out for special mention.

Energy: signalling a shift to gas

Delivering his address to Parliament in Cape Town on Thursday, 12 February, President Zuma announced a series of short- and long-term responses to the energy supply shortage that is holding back economic growth in the country, aimed at improving maintenance of existing infrastructure, increasing generation capacity and managing demand.

The government will provide Eskom with a R23-billion injection in 2015/16 in order to stabilise the utility’s finances, while directing it to switch from more expensive diesel to gas in order to fire its generators.

This will form part of a significant shift to gas as an energy source, the Presidentindicated, noting that the government would start procuring 2 400 megawatts (MW) of new gas-fired power generation capacity from independent power producers in the second quarter of this year, in parallel with the procurement of 2 400 MW of new coal-fired generation that had begun in December.

In addition, South Africa was surrounded by gas-rich countries, had discovered extensive shale gas deposits in the Karoo region, and was set to uncover further oil and gas deposits of its own through Operation Phakisa’sOcean Economy initiative, which was launched last year and was set to “be a game changer for our country and our region”.

At the same time, the quest for further alternative energy capacity was ongoing: the government’s Renewable Energy Independent Power Producer Procurement (REIPPP) programme had already pulled in more than R140-billion from private investors, with 1 500 MW of wind and solar power – out of a total 3 900 MW sourced – already feeding into the national grid.

Mining: next up for Operation Phakisa

Turning to the mining industry – the State of the Nation address happened to fall on the final day of the 2015 Investing in African Mining Indaba – President Zumasaid a number of programmes implemented under the Framework Agreement for a Sustainable Mining Industry had brought “relative stability and optimism in the mining sector, which is the backbone of our economy”.

Significant progress had also been made in revitalising distressed mining towns: the government had ring-fenced R2.1-billion to fund the process, 32 settlements were currently being upgraded and 87 housing projects implemented, and 133 informal settlements were being assessed or prepared for upgrading.

“Importantly, government, the mining sector and the Banking Association of South Africa have signed a Social Contract for the development of sustainable human settlements.”

The President also announced that Operation Phakisawould now be applied to the mining industry.Launched last year, Operation Phakisaa results-driven “laboratory” approach aimed at fast-tracking the planning and execution of projects in order to achieve NDP objectives.

It began by focusing on South Africa’s under-exploited ocean economy, seeking to unlock opportunities in shipping, fisheries, aquaculture, offshore oil and gas and biotechnology. As part of the initiative, the government has committed R9.2-billion in investing in oil and gas exploration from the port of Saldanha.

This was followed by Operation Phakisa on Scaling Up the Ideal Clinic Initiative, which aimed at promoting efficiency, effectiveness and professionalism in clinics.

“We will now explore Operation Phakisa in the mining sector. I have instructed government to partner with the mining sector to develop win-win solutions to beneficiate our mineral resources.”

President Zuma said the country’s manufacturing sector was recovering well from the global financial crisis of 2008-09, with the government having committed more than R2.8-billion to companies through its Manufacturing Competitiveness Enhancement Programme, and the private sector responding with over R12.4-billion in investment.

The latest data from the UN Conference on Trade and Development (Unctad) showed that South Africa had doubled its foreign direct investment (FDI) inflows to R88-billion in 2013, while 2014 projections were also positive.

“We have built a world-class auto sector on the African continent exporting to over 152 countries,” the President said, adding: “The leather and footwear sector has also grown to 60-million pairs of shoes, and exports grew by 18 percent with significant benefit to the balance of trade.”

The President also announced that the state would setaside 30% of appropriate categories of procurement for SMMEs, co-operatives,and township and rural enterprises.

In parallel with this, the government would continue to promote opportunities for youth-owned enterprises, with the National Youth Development Agency having disbursed R25-million to 765 youth-owned micro enterprises in 2014/15.

“The agency has also partnered with the Industrial Development Corporation (IDC) and the Small Enterprise Finance Agency in a three-way partnership that has resulted in a R2.7-billion fund for young people.”

All of which bodes well for job creation. President Zuma noted that Statistics SA’s latest figures showed that South Africa had added 203 000 formal sector jobs in the fourth quarter of 2014.

The government’s investment in youth employment was also paying off, with some 29 000 employers having claimed R2-billion for 270 000 young people they had employed under the Employment Tax Incentive which was introduced last year.

“A lot has been achieved in the past year,” the President said. “We believe that our nine-point economic intervention plan on the economy will consolidate these achievements, and ignite much-needed growth.”