Structural transformation is key to growth in less developed countries, according to an Unctad report which also holds lessons for developing countries battling with poverty, unemployment and inequality. 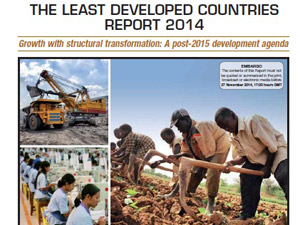 Structural transformation is crucial for economic growth and human development in less developed countries, according to a new Unctad report which also holds lessons for developing countries struggling to overcome the challenges of poverty, unemployment and inequality.

The Least Developed Countries Report 2014, launched in South Africa in November, specifically at the IDC on behalf of Unctad, argues that countries wishing to overcome inherited development backlogs should not focus only on aggregate growth; they also need to pay attention to the type of growth pattern and its main drivers.

Increases in labour productivity, coupled with job creation, together allow for the rise in real labour incomes necessary for poverty reduction and human development.

“The only way to achieve this is through structural transformation, whereby resources are shifted from less to more productive activities and the economy is able to generate continually new dynamic activities characterized by higher productivity.”

While South Africa is not mentioned in the report, which deals with the 48 countries – most of them in sub-Saharan Africa – designated by the United Nations as “least developed countries”, the authors make it clear that their core argument applies equally to developing countries faced with similar challenges – particularly to those whose economies remain to a large extent dependent on extractive industries.

The substance of the argument also tallies with the long-term economic development strategy outlined in South Africa’s National Development Plan (NDP) – and with the government’s view that radical economic transformation is now required to shift the country onto a higher growth trajectory.

In the case of the least developed countries (LDCs), Unctad argues, such a shift “requires structural transformation of the economic base in two parallel processes: increasing labour productivity in productive activities, and shifting labour from activities with low productivity – such as small-scale agriculture and services outside the formal economy – to more dynamic activities with higher productivity, such as manufacturing and high-value services”.

According to Unctad’s report, LDC economies that were able to diversify their production into higher value-added manufacturing activities grew at consistently higher rates over the past two decades than those countries that remained heavily dependent on natural resources.

Taking change in sectoral shares of employment as one measure of structural transformation, the report found that the mostly Asian producers of manufactured goods recorded the fastest rate of transformation, with a 16.2 percentage point decline in the agricultural sector’s share of employment over the period 1991 to 2012.

At the bottom end were exporters of food and agricultural goods, and of minerals – both groups dominated by African LDCs – where there has been little or no structural transformation of employment over the past 20 years.

The example of Chile

In their search for solutions, the authors of the report looked to examples of developing countries that had been successful in creating what they described as “a virtuous circle between structural transformation, productivity growth and human development” in recent decades.

Of the four countries surveyed – Chile, China, Mauritius and Vietnam – the case of Chile is perhaps most instructive for South Africa.

This is not only because of structural similarities between the two countries (reliance on commodities, persistent high levels of inequality), but also because key elements of Chile’s growth strategy chime closely with elements of the strategy South Africa is currently seeking to implement.

While Chile is often held up as a model of adherence to market principles, Unctad argues, “in reality its market reforms reflect a more pragmatic and flexible approach” – as revealed particularly when it comes to mobilising resources for development.

So, the state-owned commercial bank BancoEstado remains a key player in Chile’s financial sector, providing an array of financial services to small and medium-sized enterprises (SMEs) and small savers. The government also created two specialised programmes to fund collaboration between local firms and research organisations in order to catalyse industrial innovation. And in the mid-2000s, Chile also adopted policies that involved strategic interventions and investments in selected sectors and firms.

This was a crucial part of an overall development strategy that enabled Chile to gradually diversify its economy from copper production to other parts of the mining value chain, while developing value-added natural-resource-related activities such as the manufacture of food products, forestry and wooden furniture, pulp and paper, and chemicals.

A cursory glance at the latest annual report of South Africa’s Industrial Development Corporation (IDC), a key implementing agency of the country’s National Development Plan, makes clear the parallels, both in the high-growth sectors targeted for financing by the IDC and in the strategic imperatives underlying such financing.

South Africa’s current approach, as embodied in the work of the IDC, like that of Chile over the past few decades, speaks to three policy priorities highlighted by Unctad as key to a post-2015 development agenda for LDCs, namely:

On resource mobilisation, Unctad urges LDC governments to foster the development of a financial sector oriented towards productive investment, while creating opportunities for private investment in activities that promote economic transformation.

Development finance institutions (DFIs) have an important role to play here, both in promoting investment in activities with high social rates of return and in encouraging complementary and interdependent investments. In view of this role of “generating externalities”, Unctad argues, DFIs should not be expected to be as profitable as private lenders.

“Equally, their optimal strategy is not to minimize mistakes, but rather to minimize the cost of mistakes should they occur. The information provided by an unsuccessful investment is also an externality, and its elaboration and dissemination should be an important part of a [DFI’s] activities. This is particularly important with respect to innovative investments.”

On industrial policy, Unctad argues that markets in developing economies are often incomplete or characterised by distortions, which provides a strong case for the use of policy to shift the economy towards more dynamic sectors and activities.

Similarly, while investment in new sectors or the use of new production techniques is essential for economic diversification, it involves considerable risks, which investors are likely to take as outweighing its economy-wide benefits. “This justifies proactive support for such investment.”

At the same time, the report states, investment need not be, and should not be, limited to the modern sector. On the contrary, investment to increase productivity in agriculture is also critically important, as a substantial proportion of the workforce will remain in this sector.

“Equally, diversification of rural economies away from agriculture, so as to generate off-farm incomes, is an essential complement to structural transformation if it is to achieve a rapid reduction of poverty,” Unctad says, adding: “Rural electrification using renewable energy technologies could substantially accelerate this process.”

Even with unlimited employment growth in urban areas, the report argues, the potential for poverty eradication through industrial development alone will be limited by social and environmental considerations concerning the pace of urbanisation.

“This suggests that the diversification of rural economies into non-agricultural activities and the generation of non-farm income sources in rural areas will need to be key objectives. Even in established exporters of manufactured goods, this is likely to be a necessary adjunct to further industrialisation if poverty is to be eradicated by 2030.”