Natural gas vehicles in the spotlight

The IDC’s role in driving the use of natural gas as a viable alternative transport fuel was highlighted at the NGV 2014 South Africa conference in Johannesburg in November. 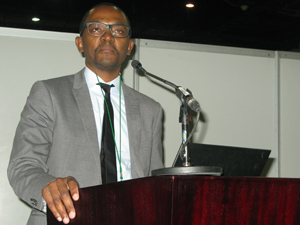 Natural gas and its potential applications in the transport industry of the future came under the spotlight at a major conference at the Sandton Convention Centre in Johannesburg from 17 to 19 November.

NGV 2014 South Africa, hosted by the SA National Energy Development Institute, brought together leading experts in the emerging NGV (natural gas vehicle) sector to discuss the future of this alternative fuel and its implications for clean and affordable mobility.

Salman said the IDC was at the forefront of driving the use of natural gas as a viable alternative fuel source in South Africa. “The IDC has already invested in a number of biogas and compressed natural gas operators, and will continue to do so.”

At same time, Salman stressed that each new project had to have economic merit.

He cited the example of CNG holdings, with whom the IDC has recently partnered in order to pursue opportunities in natural gas. CNG Holdings was formed in 2005 to develop compressed natural gas as an alternative industrial energy source and fuel for vehicles.

“CNG’s growth prospects lie in being able to unlock further gas supply as well as being able to supply gas in provinces where the Sasol network cannot reach.”

Salman noted that successfully implementing green transport fuels would require converting vehicles to enable them to run on alternative fuels.

“Although the NGV industry is still in the early ages, the environmental benefits and cost savings offered by technologies such as compressed natural gas are encouraging,” Salman concluded.

There are roughly 5-million natural gas vehicles on the road worldwide, the largest numbers being in Argentina, Brazil, Iran, Pakistan and Thailand. NGV cars are also gaining popularity in Germany and Italy.

On the continent, South Africa is one of the most active African in the field. By the end of the first quarter of 2014, there were almost 300 natural gas vehicles on the country’s roads, including company cars, taxis and minibuses.