Expanding production in value-added sectors, promoting import replacement through localisation, and creating employment opportunities were the key strategic drivers behind the IDC’s investments in mining and manufacturing in 2013/14. 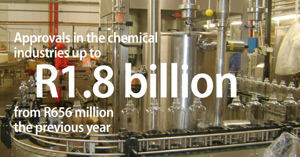 The Industrial Development Corporation (IDC) lifted its funding approvals for projects in manufacturing by 50% to R4.8-billion in the 2013/14 financial year, successfully fulfilling its role as a chief enabler of industrial development in South Africa despite an extremely difficult operating environment both locally and internationally.

Compared to the previous year, funding levels increased in all four of the high-growth manufacturing sectors targeted by the IDC.

The chemicals and allied industries were a key beneficiary of this growth, with approvals almost trebling from R656-million to R1.86-billion, followed by forestry and wood products, for which approvals grew by 63% to R647-million.

By contrast, IDC funding approvals for projects in mining and minerals beneficiation were hard hit by rising input costs, continued weak global demand for commodities, and protracted industrial action, dropping sharply from R5.3-billion in 2012/13 to R1.7-billion in 2013/14.

Notwithstanding the challenging environment, the IDC continued to pursue various opportunities that it views as long-term investments in the sector.

They also included the commissioning of first module of the Masorini Iron Beneficiation plant, which the IDC and South African company Iron Mineral Beneficiation Services (IMBS) are building in Phalaborwa, Limpopo province in order to commercialise IMBS’s patented technology, Finesmelt™.

Finesmelt™ is capable of beneficiating fine and superfine iron ore into high-quality metallic iron units without agglomeration. The IDC has invested R42-million equity into the Masorini Iron Beneficiation project in return for a 33% shareholding, and provided a further R34.5-million in debt.

The Masorini plant will use the South African-designed, developed and built Finesmelt™ technology to produce metallic iron, providing the local steel industry with a lower-cost alternative to scrap steel.

The IDC stepped up its funding of projects in the chemicals and allied industries in 2013/14, in line with the Industrial Policy Action Plan (IPAP) focus on growing a sector with high job-creation potential.

The IDC also invested R390-million in the development, by black-owned enterprise Amka Products, of a state-of-the-art facility for manufacturing household and personal care products for the export market – a project which is expected to create 800 new jobs.

The IDC-Amka partnership, which now stretches back two decades, exemplifies the way in which the IDC is supporting the creation of internationally competitive companies, developing black industrialists, establishing new industrial capacity and spurring job creation.

Increasing capacity for local assembly and manufacture in the strategic rail, automotive and energy sub-sectors was the key focus of the IDC’s investments in the metals, transport and machinery products industries in 2013/14.

The IDC also provided R207-million to help Bambanani Pipes and Afgate, makers of steel pipes and fittings for infrastructure projects in bulk water, gas and liquefied fuels, to expand their manufacturing capacity. This falls in line with the IDC’s objective of fast-tracking the localisation of supply chains for state-owned companies involved in the government’s infrastructure build.

Looking ahead, as South Africa moves to unlock the economic potential of its oceans – as part of Operation Phakisa, which was launched by President Jacob Zuma in July 2014 – the IDC will be pursuing initiatives to help revive the country’s ship building and repair industry.

Geographically, South Africa is strategically positioned to take advantage of the busy shipping routes in its waters. The IDC will seek technical partners to jointly conduct feasibility studies into the viability of establishing new shipyards along the country’s extensive coastline.

Development opportunities in forestry have high potential for creating jobs, alleviating poverty and empowering rural communities in the country.

Forestation, in particular, has been identified as an untapped opportunity by the IPAP as well as the National Development Plan (NDP), and the IDC is accordingly working to develop 25 000 hectares of forested land in South Africa by 2017, as well as to support local forestry companies in establishing a market presence in Mozambique, Tanzania, Ghana and Nigeria.

In the furniture sub-sector, the IDC provided an independent manufacturer with expansion capital, while approving funding for a “proof of concept” to manufacture bamboo laminated boards – a project with high potential for import replacement by means of localisation.

There was a marked increase in the sourcing of locally manufactured textiles, clothing and footwear by South African retailers in 2013/14, aided by the SA Revenue Service’s growing responsiveness to illegal and under-invoiced imports.

At the same time, the Preferential Procurement Policy Framework Act, which prioritises local manufacturers in public sector procurement, is starting to gain traction, while the Department of Trade and Industry’s (dti’s) Production Incentive Programme has helped more than 200 manufacturers to enhance their production processes.

The IDC played its part in stabilising and turning the sector around in 2013/14, approving R200-million for the Sustainable Cotton, Textiles and Apparel Cluster, and a further R250-million for the Clothing, Textile, Footwear and Leather Competitiveness Scheme.

The corporation also extended its successful partnership with local company Chic Shoes, investing in a second phase of expansion that will create around 236 new jobs while helping the company to meet a growing demand for its products – Chic Shoes’ pumps (flat ballet-style shoes) were the highest-selling footwear item at Woolworths over the past year.