Mvuleni Geoffrey Qhena, CEO of the IDC, shares the corporation’s latest financial results and how regional integration and partnerships with business are key to its vision for the future. 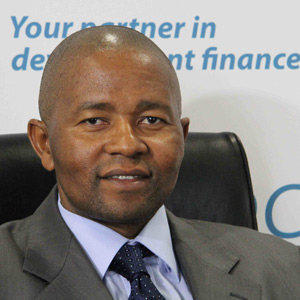 The Industrial Development Corporation (IDC) continues to enhance its industrial development impact, despite a difficult operational climate. The corporation’s financial results for the year ended March 2014 were announced Thursday, September 18.

The IDC reported a record R13.8-billion in approved funding – a 6% increase over the previous year’s R13-billion.

A big chunk of that increase came from funding activities in green industries, which rose by R1.9-billion to R5.7-billion.

“Disbursements, which is the money that has actually gone into the economy, is the second-largest [in the IDC’s history],” said Chief Executive Officer Mvuleni Geoffrey Qhena in an interview on the day of the announcement. Disbursement funding came in at R11.2-billion, compared with the previous year’s record R16-billion.

The results, he noted, after a year of very moderate economic growth in South Africa, highlight the achievements and challenges still facing the IDC and the country as a whole.

However, says Chief Financial Officer Gert Gouws, the IDC’s after-tax profit was hit by a change in the method of accounting for (and taxation of dividends from) preference shares, resulting in an after-tax profit of R1.6-billion.

“Overall, we have had a very good set of results,” Gouws said.

The main challenge facing the IDC, he said, remains that of job creation. “The number of jobs we have saved and created combined is just less than 20 000, compared with 22 900 last year.

“That has resulted in the cost per job being slightly higher than the previous year due to the R5.7-billion that has gone to green industries which does not necessarily itself create more jobs.”

The green sector has performed very well, Qhena noted, adding that the increase in funding to the manufacturing sector is also very encouraging. “We know that manufacturing in South Africa has not been performing to the extent that it should, but we have seen that, and I think going forward we will see more focus on the manufacturing and agro-processing industries.”

Qhena identified regional integration as central to the IDC’s future activities, predicting significant growth in opportunities across the continent in the next five to 10 years. In this fiscal year, more than R2-billion has been approved for investments outside of South Africa.

Private sector ‘must come to the party’

Qhena was upbeat about the future, saying: “For the five years we have looked at, we are looking at investing about R100-billion into the economy. Now, for us to be able to do that, we have to go out and raise the funds – so we will see the level of our borrowing increasing to be able to support these investments.

“R100-billion is what we are putting in, because this economy of ours needs more stimulation, and it needs more activity, particularly in manufacturing, processing and beneficiation.”

In order to achieve this, Qhena said, it was important for the private sector to come to the party. “The message to industry is that the IDC is a sustainable organisation and [the IDC] is key to industrial development finance in the South African economy.

“We achieve this through partnership, because our activities do involve the private sector and the government, so the message to industry is that we are open for business and we want business to partner with us.”

Key achievements at a glance