Foreign direct investment into South Africa increased by 80% in 2013, making the economy again the biggest recipient in Africa, with about $8.2-billion pouring in.

Foreign direct investment into South Africa increased by 80% in 2013, making the economy again the biggest recipient in Africa, with about $8.2-billion pouring in. But far more is possible if the country’s advantages are more successfully leveraged upon, while factors that are proving to be of particular concern to the investor community are successfully addressed.

South Africa is back in the number one position as the biggest recipient of foreign direct investment in Africa, but it is important for the country to continue to enhance its attractiveness as a prime investment destination.

In 2013, South Africa received $8.2-billion in foreign direct investment (FDI), followed by Mozambique, which received $5.9-billion. Nigeria followed closely behind with $5.6-billion. These figures are from the World Investment Report 2014 released by the United Nations Conference on Trade and Development (Unctad) on Tuesday, 24 June. In 2012, South Africa was three places down after Nigeria, Egypt and Mozambique.

Commenting on the report’s findings, Jorge Maia, head of the research and information department at the Industrial Development Corporation, said various factors attract FDI to South Africa. Several of these factors were highlighted by respondents to the Ernst & Young 2013 Africa Attractiveness Survey, which rated South Africa as the most attractive destination to do business in Africa. These included:

In addition, South Africa has a very diverse economy which is technologically advanced in many ways, Maia explained. 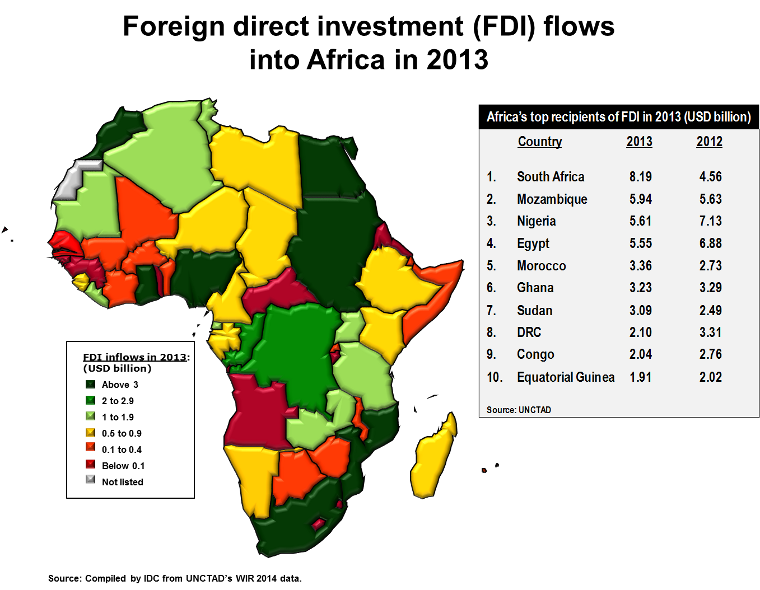 A portion of these inflows pertained to foreign loans from parent companies to subsidiaries in South Africa, according to the SARB. Specific reference has also been made by the SARB to the expansion of a foreign parent company’s equity stake in its subsidiary in South Africa’s financial sector – believed to be the increase in Barclays’ stake in Absa, according to Maia. The capitalisation of Cell C by Orger Telecom could also have been included in the figures. More recently, the Mariott hotels’ acquisition of Protea is likely to have been recorded amongst the R8-billion in direct investment inflows in the first quarter of 2014.

The Barclays transaction, however, also led to an outflow of funds of a similar magnitude for the purchase by Absa, now known as Barclays Africa Group, of Barclays’ African assets. This, in turn, is likely to have contributed to South Africa’s FDI outflows in 2013. The latter totalled $5.6-billion according to the Unctad report, or R54.2-billion as per the SARB, and placed the country in leading position amongst Africa’s outward investors, said Maia.

The Unctad report notes that FDI inflows globally increased by 9% in 2013 to a total of $1.45-trillion. Africa as a whole recorded an increase of 4% to $57-billion. “This was a reasonably good performance [for Africa], considering that FDI flows into Asia increased by 3%. But of course the quantum when it comes to Asia is much, much larger at $426-billion,” Maia explained.

“The relatively faster rates of economic growth being experienced by emerging and developing economies, together with their rising prominence on the world stage, make them particularly attractive for FDI. Both market- and resource-seeking investment opportunities are being pursued by the global investor community in developing economies, as well as investments in their manufacturing, services and infrastructure sectors.”

With regards to market-seeking investment, for instance, the Unctad report emphasises that Africa’s middle class is becoming a very attractive prospect for outside investors. Over the past decade, Africa’s middle class has increased by 30% to a total of 120 million people, estimates Unctad.

Although FDI growth has been significant, Africa could fare much better in attracting direct investment if certain barriers were removed. Tariff barriers within various regional economic communities on the continent (such as the SADC) had come down substantially, but non-tariff barriers remained a major constraint. “These [non-tariff barriers] are still a very important impediment when it comes to FDI, including cross-border investment, as well as intra-regional trade, which is relatively low in Africa.”

South Africa could take out a lot from the report, according to Maia. The country faces an “incredibly competitive global environment in the investment arena”. South Africa compete with numerous economies throughout the world for FDI, many of which with substantial comparative and/or competitive advantages. This means that “there is no room for complacency and that the country must continuously strive to enhance its attractiveness as an investment destination.”

“We do exhibit a number of advantages and positive aspects that underpin our country’s attractiveness as a destination for FDI. However, certain factors have become clear deterrents and/or are being viewed by global investors with particular concern, such as the availability and cost of power supply and, more recently, the debilitating protracted industrial action in South Africa’s mining sector,” he said.