Almost 300 people are on the IDC’s bursary programme, which will pay out R14-million this year alone. 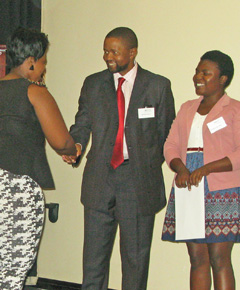 Ecstatic 18 year old Mudanalo Mulaudzi believes she is heading for a bright and successful future. Her life took a turn for the better last month, when she heard she would receive a bursary from the Industrial Development Corporation.

“It’s a blessing for me and a dream come true. I have always wanted to study accounting science at the University of Witwatersrand,” says Mulaudzi, who wrote matric at Tshiitwa Secondary School in Limpopo.

Mulaudzi, who grew up in rural Limpopo, says getting the scholarship is a ticket out of poverty. She hopes to join the growing number of black female chartered accountants in the country. “I want to work hard in my studies and prove to everyone else that anything in life is possible.”

She was one of the 72 students who were awarded bursaries by the IDC as part of its corporate social investment programme. They were congratulated at a ceremony on 23 January at the IDC headquarters in Sandton. The bursaries will pay for their tuition, books, meals and accommodation during their studies.

Speaking at the ceremony, IDC divisional executive for agro and new industries Khumo Morolo encouraged the students to work hard in achieving their dreams and not to listen to naysayers. “You are important to us and the future of the country and without your success we are clearly doomed,” said Morolo.

A former bursary beneficiary, Awonke Tshefu, spoke of how the scholarship had helped him continue his studies in chemistry at Fort Hare University. Tshefu, who received a bursary in 2009, had almost dropped out of his studies because he could not afford the tuition fees for his second year.

He thanked the IDC for helping him and encouraged the new bursary recipients to work hard. “Life became much easier when I was awarded a scholarship by the IDC. I focused more on my books and no longer had to worry about where my next meal was going to come from.”

Chief executive officer Geoffrey Qhena encouraged the students to take advantage of the opportunity and to use education to become globally competitive. “You have not arrived yet; it is just the beginning. We will support you as long as you play your part,” he said.

During the ceremony, 12 top performers from universities around the country, who were also on IDC bursaries, received certificates and iPads for their hard work.

Ashley Bridget Wilton, who is in her second year at the University of Cape Town, received an IDC bursary in 2013 for her first year of studies. She is currently doing an engineering degree in geomatics. “It feels great to be acknowledged for my hard work.”

About 272 students are on the IDC bursary programme and R14-million will be spent on meeting their needs this year.