The IDC has sent a top team along with the South African delegation to the World Economic Forum meeting. 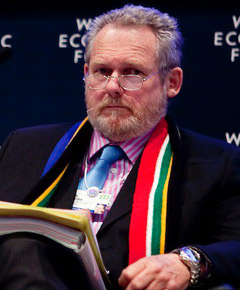 As the economic fortunes of Africa continue to brighten, South Africa is investing heavily in building and upgrading infrastructure as a way to stimulate economic growth locally and regionally.

Africa’s economic growth is expected to accelerate to 4.7% this year and 5% in 2015, according to the United Nations. However, South Africa is lagging behind other African countries, and the International Monetary Fund forecasts an economic growth of 2.8% in 2014 for South Africa.

In efforts to stimulate South Africa’s modest economic growth rate, cabinet ministers, chief executives and business leaders from major South African companies are attending the World Economic Forum (WEF) annual meeting in Davos. They are in the Swiss resort to update global business leaders on the government’s implementation of its National Development Plan (NDP). The plan aims to improve living conditions by halving poverty and unemployment by 2030, as well as contribute to enhancing regional economic integration in the Southern African Development Community.

NDP is a framework

Presenting the NDP to delegates from around the world, Gordhan said South Africa was determined to confront its challenges and that the “the NDP is the framework within which we are doing that”. The government was aware of the energy, infrastructure, logistics and skills challenges and was “committed” to resolving them.

Prior to the conference, Gordhan had said the NDP provided “a strong platform for collaboration among business, government, labour and civil society and the transition to a faster-growing, more inclusive economy”. It promoted enhanced competitiveness, expanded infrastructure, greater spatial efficiency in growing cities and accelerated rural development. “It prioritises measures to build a capable, effective state that delivers services to citizens while encouraging business investment and growth,” he said.

Speaking to South African Press Association (Sapa), Davies said because of Africa’s encouraging growth prospects, an increasing number of investors were looking into putting their money or increasing their investments in the continent. They also saw South Africa as an important gateway into the southern African market. “The future of the African continent seems to be moving into more value-added activities, industrialising our continent. And that’s our ambition.”

An area of high interest at WEF 2014 was South Africa’s infrastructure development plan, the minister added. Quite a number of international companies were realising that South Africa was “serious” about the plan, which was envisaged to benefit not only South Africa but the region as a whole.

“So I think we’re looking at a fairly significant change in our trade profiles, in the medium term, with the African continent.”

On the trade issue, Gouws, speaking to CNBC Africa on the first day of WEF 2014, said the intra-trade agenda was important to the IDC as a development finance institution (DFI). “The IDC is an important player. We don’t work alone because we form partnerships with other DFIs on the continent, with civil society, with government and the private sector.”

This partnership with African DFIs meant that if South Africa grew economically, other African countries would not be left behind. “We can never as South Africa be the island of prosperity in a sea of poverty… If Africa grows South Africa will grow and vice versa. We need to trade with Africa. It’s all about regional integration.”

South Africa was optimistic that it would continue to improve its growth prospects. However, the private sector, together with other role players, had to play their part to create “the right levels of confidence”, said Gordhan.

The government was open to working with business to improve the country’s economy and attract much-needed foreign investment, he added. This would mean creating higher levels of policy certainty, which would encourage this kind of investment.