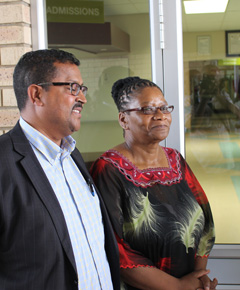 Recognising the need for better mental healthcare in Mahikeng, psychologist Flora Makama and her colleagues, approached the IDC to fund a new wellness centre. This project has now come to fruition.

An IDC-funded wellness centre, to assist patients with mental illnesses, has opened in Mahikeng in the North West province. During its construction phase, the centre created some 50 jobs.

“The challenge we face in Africa regarding mental and other stress-related disorders is that patients are generally reluctant to seek medical attention because communities tend to stigmatise such illnesses. And the consequences for not seeking treatment are often fatal,” said Modise, adding that the country’s suicide rates can also be linked to stress, among other factors.

Recent statistics from the Mental Health Information Centre (MHIC) prove an increase in mental illness across the globe, with 25% of these patients suffering from psychiatric rather than general medical conditions.

“Given the rising number of people suffering from mental illness in this region, Kgatelopele will indeed help to alleviate demand,” said Modise.

The 32-bed facility is the brainchild of three Mahikeng-based psychologists, led by Flora Makama. Having identified the need for a local wellness centre to treat mentally ill patients in 2011, Makama and her partners approached the IDC for funding.

“The determination of the three women involved in the project was a big motivation to the IDC,” said IDC regional manager for the North West, David McGluwa.

“Makama and her partners had a sense of direction with regard to what they wanted to achieve but they did not have a business plan and most importantly they lacked funding.

“Once the IDC came on board, the project took shape and here we are today celebrating the official launch of this project,” McGluwa added.

Kgatelopele, with 35 employees, will work with patients from Mahikeng, Rustenburg and surrounding areas, including nearby Gaborone in Botswana. The centre specialises in providing nursing healthcare that is not heavily dependent on high-technology monitoring or complex diagnostic procedures. It caters for sub-acute illnesses; recovery after a serious illness or operation; rehabilitation following an accident or amputation; chronic or terminal care; and psychiatric conditions that require hospitalisation.

Sub-acute illnesses are diseases that have not yet become chronic, or long-lasting.