Somta to drill its competitors 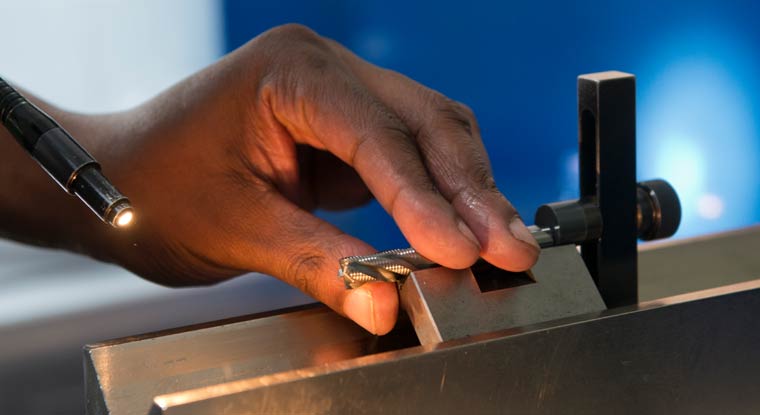 02 Sep Somta to drill its competitors

There is a revolution taking place in the South African cutting tool industry, and it is coming straight out of Pietermaritzburg. Somta Tools, a cutting tool manufacturer, has added a new product to its line – tools made from the faster and more efficient tungsten carbide material. The new product will not only put pressure on competitors that stick to high-speed steel drill production, but it will open Somta to more business opportunities in the aviation and motor vehicle industries.

According to Somta’s financial director, Sharl van Rensburg, high-speed steel is a declining market and the introduction of carbide will ensure Somta remains at the top of the South African cutting tool industry. “Going into the future all new technology will utilise tungsten carbide tooling.”

Lance Hockly, Somta’s carbide manager, says most customers switch to carbide because it is capable of running at higher speeds compared to high-speed steel. Though very stable and robust, high-speed steel operates at slower cutting speeds, but carbide can run at very high speeds thereby drastically shortening machining times. “As the world continually searches for ways to reduce costs and improve efficiencies, this range of tooling is an obvious choice.”

Since British steelmaker Samuel Osborn established Somta as its South African division in 1954, it has been producing high-speed steel, and Van Rensburg points out that the older product will not be ousted by carbide any time soon. Somta still has a number of clients that rely on high-speed steel tooling. As a result, the company’s transformation to tungsten carbide will be gradual over a number of years.

Though Swedish chemist Carl Wilhelm Scheele discovered tungsten carbide in 1781, it was only in the 20th century that it began to be used in cutting tool applications. Behind diamond, it is the second hardest material in the world. It is made from powder that is compressed into shape and consists primarily of cobalt and tungsten, with low levels of chrome and palladium added to it.

The computerised machines used for manufacturing carbide tools significantly reduce the amount of time it takes to produce a tool compared to manual high-speed machines. During production, a high-speed drill goes through 22 machines in the factory before it is complete. Even when production is prioritised, it can take four weeks to produce a complete drill. But operations for carbide drills take place on one machine and a tool can be made in eight minutes. Additionally, carbide tooling can be designed for multiple functions and reduce machining times.

For Somta’s clients, the greatest advantage of carbide drills is the time it takes to drill holes.High-speed steel drills a hole in 55 seconds, but carbide is able to do it in approximately 10 seconds. The company has two carbide patents pending for its Hi Feed Cutter for super hard materials and Varicut End Mill for outstanding machining speeds and finish in a broad range of materials – after a number of tests worldwide, these tool ranges are already being touted as some of the best designs in the world.

Van Rensburg believes Somta dominates the high-speed steel cutting tool industry in South Africa, having between 55% and 60% of the market. But by producing tungsten carbide drills, it will be able to expand its market to include local motor manufacturers and the international aviation industry. He says 95% of local companies that use carbide have to import their tooling at high costs. With Somta being South Africa’s major tool manufacturer, prices will be reduced considerably.

A number of automotive factories are already experiencing the benefit of sourcing carbide tooling from Somta as they not only get a cheaper tool, but one that outperforms the imported tool as well and has a shorter lead time. “One particular automotive manufacturer was paying R2 500 for an imported drill, whereas Somta supplied it to them for R700, and extended their tool life,” says Hockly. The company also offers a full regrind and recoat service for its tools.

“One additional benefit for South African industry is that they get a more cost effective tool, with at least equal performance, whilst being able to source locally, create jobs for South Africans and help their B-BBEE scorecard,” adds Hockly.

Van Rensburg adds that Somta values face-to-face interaction with its clients which allows the company to produce the drill that suits the client’s needs. “What gets me excited is that we can go to our local motor manufacturers, work with them, spend time with them, find out what their needs are and come back with a tool that we make here instead of them importing it.”

The company also exports its tooling to over 70 countries worldwide and the addition of the carbide tooling ranges is opening up many new opportunities. Already Somta has won some substantial contracts to supply this tooling into the German market.

For Somta to produce carbide tools, Van Rensburg says it needed investment. The company already had two machines but to produce high volumes and become a serious carbide drill manufacturer, it needed more machinery and sophisticated measuring equipment which could produce the very tight tolerances required for such tooling. That was when the Industrial Development Corporation got involved. “If you are going to deal with automobile manufacturers and the aerospace industry, you cannot make them a tool that will more or less give them the hole that they need,” he explains. “When you make the tool you must be able to give exact measurements of it.”

Funding from theIDC helped the company buy machines worth R10.5-million as well as expand the space in the carbide plant. Hockly says the new machinery has 700 times magnification from three different angles.

To operate the carbide machines, Hockly adds that the company needed employees with specialised skills. Instead of employing new workers, however, existing employees who had previously worked in the high-speed steel plant were trained to work with the new material. Operators need to know the design of a completed tool, which means each person is responsible for producing quality. “The operators are highly trained and educated. They have to understand the processes, the angles and geometries. It can take a worker anything up to six months to become confident to stand on a machine alone.”

But with the high level of expertise needed to run carbide machinery, creating numerous jobs is not a reality, explains Van Rensburg. “You might only create three jobs. But the job is very skilled and is at a much higher level than what is needed in the high-speed steel plant.”

Hockly adds that the IDC’s investment saved 12 jobs at the company. The operators, who were shifted from the high-speed steel plant to the carbide plant, would have lost their jobs because of the retrenchment process that took place at the end of 2012.

Carbide might be the tool for the future, but for now, high-speed steel still presents a lot of opportunity for innovation, says Van Rensburg. “As a company we cannot say we are walking away from high-speed steel tooling because that is the backbone of our business.”

The sort of innovation that will take place in high-speed steel production, adds Hockly, involves point geometries and tool design. “It will be small changes but significant in that it will allow you to run a little faster.”

Machines that make these drills are as sturdy as the tool itself – Somta still runs machines that have been in use since the 1950s. And whereas carbide tools will shatter when colliding with a wall, high-speed steel will retain its shape and will still be in working order.