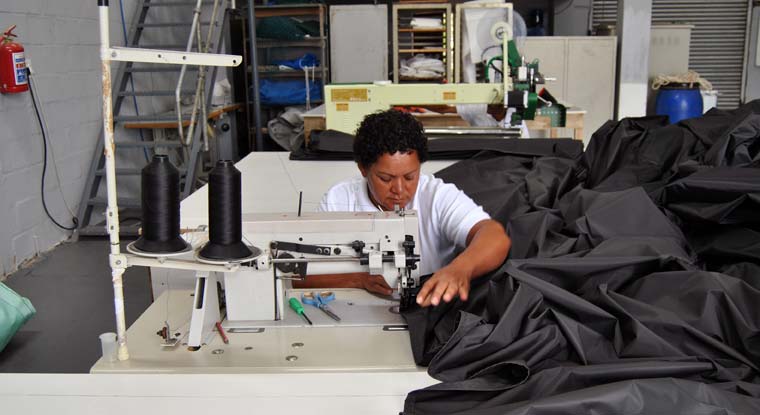 With the cold Atlantic Ocean crashing on your left, and the stark but beautiful West Coast on your right, you could be forgiven for thinking you are on a wild ride into nowhere.

And just when you think you’ve gone as far as possible, you are suddenly in the small town of Velddrif. Life here is slow, the air redolent with the aura of forgotten seaside fishing town. The biggest industry is probably the salt from the pans at the entrance to the town, but even they are as quiet as the retirement complexes along the main road.

But here, in the centre of this calm, Stretch Tents International has bought a large hangar-like property and has set up shop. A huge white tent stretches across the ceiling, and sewing machines line the walls. The staff is small, all busily doing their thing – on the sewing machine, seam welder, printing press. It could be bewildering, given the long strips of canvas on the sewing tables, but Stretch Tents runs an orderly ship.

“We’ve been [in this building] a year already, and we expect steady growth,” says company owner Marion Cole. “We specifically bought this property so that we can expand our tent-making business, as well as make other products.”

Cole is an interesting, dynamic woman. Diminutive but driven, she spent decades in the sailing industry as a sailor and sail-maker. She knows her stuff, and could be snapped up by any big company in a busy metropolitan town. But she chose Velddrif. “I was brought here by the huge number of people needing work. We don’t need highly skilled people at Stretch Tents. But what this is, is a great opportunity to teach people about working.” The idea is to create and grow a culture of working.

At present, there are 13 staff members, but in the next six months, this should grow to 24, prompting Marius Green to come on board to manage human resources as the company grows. The group is expanding its product range, and is beginning to put feelers out into the market for large industrial containers, such as fishmeal bags. These are in demand on the West Coast, and with Stretch Tents servicing the need, the market will be able to source its bags locally.

But the core business will remain the huge stretch tents, which can take any shape and be set up on any surface. Some 90% of the group’s tents are exported. Stretch tents is a South African concept, explains Jonathan Tucker, the marketer. He recently returned to the country after spending years working abroad, where he honed his skills for rigging – putting up – these large structures on the festival circuits of Europe and United States.

The tents are made from a tough PVC coated, or a PU coated material. “It is a technical fabric with polymer coatings,” says Tucker. Whereas the early versions were not waterproof, today Stretch Tents makes a waterproof product, which brought greater export possibilities. The fabric is also fire-retardant, and the company was the first making these tents to receive California fire-retardant certification – a very stringent standard, says Tucker.

They are used for festivals, parties, weddings and other events and are easier to assemble and dismantle, as well as transport, than traditional marquees. There are Stretch Tent International tents at Burning Man in the United States, Glastonbury in the United Kingdom, at the London Olympics and the Palma Yacht Race, as well as closer to home at Afrika Burn, among many other festivals.

Also, they have no set frame, but are stretched over poles placed anywhere. And it is possible to bring down the walls and put in a secondary wall layer as well as duct heating, perfect for the colder northern climate.

“We have long-term plans,” Tucker, “and are doing research and development. We are making industrial bulk bags for rooibos soil, mining and fishmeal.” The group has a printing press and can print logos and designs on the bags.

“We also want to increase the number of tents going through our factory, and teach rigging.” Already, the company makes 2 000m2 of tent a month. It also makes boat covers and repairs other tents.

“Another long-term goal is almost recycling the tent – repairing tents and donating them to underprivileged people to run their own rental shops.” It’s good business: a tent sells for R360 to R450 a square metre, and then is rented out for R30 a square metre. A tent lasts for three to five years, and can be put up and taken down in a day. And blue sky thinking at the group is eventually to have its own mill to knit the fabric locally.

It has received loan funding from the Industrial Development Corporation, both through the Western Cape regional office and the Gro-E Fund, as well as a grant from the Department of Trade and Industry. This cash has helped to buy sewing machines and a patch machine for strengthening the corners and rope holes, and with cash flow, which allowed the company to continue functioning after it invested heavily in buying its new premises.

The potential local impact, particularly from the industrial bags, is huge. The group can make 500 polypropylene bags an hour, and print 600 an hour. “We will be able to give work here, that otherwise would have been done in other provinces,” says Cole. “We will give the local customers a local supplier.”

This will help to build a community, strengthen relationships and give a sense of pride to staff that their products are sold internationally. As for workers, there are five high schools within 40 kilometres of the factory, meaning the pool of potential labour is continuously growing. “We need to instill a working culture, a work ethic in our children,” says Cole, who is a particularly community-minded person. “We need to teach people how to work, and what the expectations are when you are working.”

One such person who is learning the ropes rather quickly is 28-year-old Frikkie Frans. He had worked for a paltry few hundred rands a month on a potato farm in St Helena Bay where a printing machine was sitting idle. By chance, Cole stumbled across the machine, and snapped it up. She also offered Frans a job. He dismantled the press on the farm and reassembled it at the factory, where he now lives and works with his family.

“I live here at the site,” says Frans, “with my wife and two children. It is great for me. The farm didn’t pay, so I can here for work. My wife might also get a job here.” He has learned to run the printing press, and is being given other opportunities for growth.

“It was a big change to move here, but I am happy,” he says. Frans also acts as a caretaker, keeping the premises shipshape. And when his young children are old enough for school, he will be able to send them to the local school with pride.