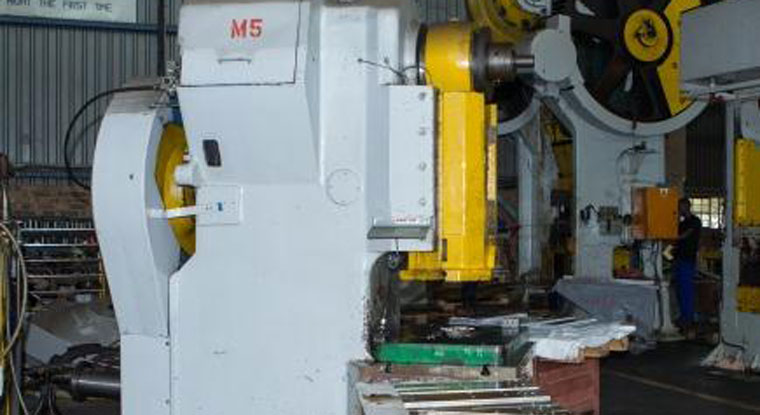 The year 2013 was been a tough year for SOS Tool & Die, possibly the toughest since it opened in 1983. There had been disasters in the steel and motor manufacturing industries, coming just as economies were struggling out of the global recession.

Yet despite these setbacks, the company, which makes steel automobile parts for several car manufacturers, is digging deep to remain resilient and optimistic about its prospects for the future.

SOS lost its main source of supply when steel maker ArcelorMittal was forced to shut down its Vanderbijlpark plant after a fire ravaged the factory in February 2013. As a result, SOS lost approximately R700 000. “We struggled in that period,” says director Stephanie Sternagel. “We stopped our production lines because there was no steel available. We tried to get material from other companies. This was when we started to import the material at a cheaper price and better quality.”

But just as the business was steadying itself, workers at seven car manufacturers went on a month-long strike between August and September of that year, effectively denting the South African economy. Vehicle exports dropped as much as 75%, according to the National Association of Automobile Manufacturers of South Africa, and the industry is said to have lost R20-billion. SOS was almost crippled as it was unable to deliver its goods.

David McGluwa, the regional manager of the North West IDC office, says that although SOS continued production at the time, all it could do was place its goods in stock as none of the motor manufacturing companies was demanding parts.

In the meantime, the IDC’s funding will help to keep the company afloat until things get better. In 2011, it had helped with machinery and working capital worth an accumulated value of R2.5-million.

Sternagel is optimistic about the future, saying that it may bring some good fortune. Car manufacturers Toyota, Ford and Nissan, for whom SOS manufactures brackets, plates, chassis components and other parts, are releasing new models that are expected to perform well on the market.

McGluwa is also confident that SOS will recover in the near future. “It is obviously not good with the strikes. But we are positive that the season will pass and hopefully things will stabilise.”

Yet there is another more concerning issue that could affect the company in the long term – the shortage of good toolmakers. Being a tool manufacturer, SOS needs toolmakers who can produce press tools and wire cutters. But Sternagel points out that most of South Africa’s best toolmakers have left the country and sought better opportunities in Australia and the Far East.

SOS is situated in Brits, a small mining town in North West province, just 48 kilometres from Pretoria. With a population of approximately 53 000, the town’s growth is stagnant. According to McGluwa, many of Brits’ educated individuals leave for better job opportunities in Gauteng, which further hinders the town’s development. He says the IDC is making an effort to halt the brain drain by creating jobs locally, but the government should put in place measures to ensure that educated population remain in the province.

The province itself has an unemployment rate of 40%. All income generated from mining and manufacturing makes its way to Gauteng, leaving the province with a lack of good infrastructure. Moreover, North West’s neighbour, Botswana, is looking to attract companies and workers with lucrative business deals, pulling them away from towns like Brits and Rustenburg.