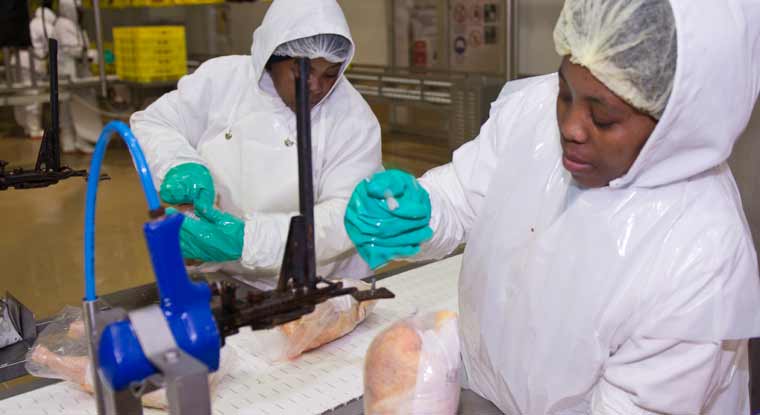 In the farming town of Reitz in the north-eastern Free State, standing among some of the largest maize silos in the southern hemisphere, is an ultra-modern broiler chicken processing facility. It is an interesting contrast, but it is what happens inside the plant that matters.

The inner workings are part of Grainfield Chickens’ vision to feed South Africa. “We are currently processing 650 000 chickens a week,” says Sas Kasselman, Grainfield’s managing director, double the number processed a year ago.

Though established in January 2011, the company ran its first test in July 2012 with just 300 chickens. Four days later, it started official production with 9 000 birds in a day. Now, the abattoir processes 130 000 birds a day.

But Grainfield’s production only accounts for about 2% of the country’s chicken supply. Kasselman says South Africans consume approximately 23 million chickens a week. Of that number, 19 million are locally farmed. He adds that South Africans consume more chicken than any other meat: 49% of animal protein consumed per person is poultry, 26% is beef, 13% is eggs, 7% is pork and 5% is mutton and goat.

Kasselman points out that the poultry intake in South Africa has grown since 1970 while that of red meat has decreased. Each person consumes an average of 36 kilograms of chicken a year, whereas beef is just 17 kilograms. By 2019, chicken consumption is expected to have increased to about 47 kilograms. “These are the reasons we got into the chicken industry.”

In terms of production, Grainfield is still in phase one. Kasselman anticipates the factory will only implement phase two three years from now, which will bring the abattoir to full capacity. This will allow it to process up to 1.5 million birds a week. “We are at a very fast growth period and we will probably stabilise and take a breath. And as the market demands grow then we will probably start with phase two.”

Grainfield Chickens was formed under what was the Vrystaat Koöperasie Beperk (VKB), or the Free State Co-operative Limited, before it converted to VKB Agriculture Limited in April 2011. In 2010, the VKB board looked for a way to expand its operations. According to Kasselman, it was difficult for the co-operative to grow as it was surrounded by bigger competitors. “They asked, ‘How can we grow our business?’ It already had maize and soya beans. So it also asked, ‘How can we add value to those products?’”

Chicken processing was one of the ideas coming out of this. Because 60% of chicken feed is maize and 18% is soya beans, VKB thought of starting chicken production. It established two more projects, including a soya crusher plant in the town of Villiers, called Free State Oil, and a feed mill in Vrede, which has the capacity to make about 18 000 tons of chicken feed a month. This figure is at 9 000 tons at present.

While searching for backers, Grainfield came across the Industrial Development Corporation, which approved funding of an accumulated R130-million. This includes finance for a 23,9% stake in the company on behalf of a workers trust which currently represents 900 workers.

Grainfield employs 900 people, of whom 90% are women. This includes a second shift implemented around December 2013.

The company has contracted 70 independent farmers in Free State who have environmentally controlled chicken houses. The temperature and air flow of these houses are controlled electronically. Because of their advanced structure, a house typically costs R3.5-million. At present, 70 houses are producing chickens and the company is planning on adding a further 140 houses. “You are looking at another 140 job opportunities.”

Adding to Grainfield’s employment figures, VKB’s feed mill employs 40 workers and its soya crusher plant has 30 employees. “All three of these projects are in rural areas and have created job opportunities in a segment where jobs are most needed,” Kasselman explains.

In a recent opinion piece written for the Mail & Guardian newspaper, the chief executive of the South African Poultry Association (Sapa), Kevin Lovell, said that about 170-million chickens were imported every year into South Africa. In his piece, “Poultry imports slaughter industry” (31 May 2013), Lovell explained that most of these were leg quarters, which were excess supply the United States and Europe did not want, and breast fillets from Brazil.

According to Kasselman, the chicken industry in South Africa is in a terrible state because of cheaper imports. “Since Europeans and Americans prefer breast meat, the portions they do not want, like the leg quarters, are being imported into South Africa at a lower price. The current price on the market is lower than South African manufacturers’ production costs.”

Lovell said this had effectively destroyed profitability for local producers. They were stuck with excess capacity because of the increase in foreign supply. Consequently, they had to discount their prices heavily. Sapa has offered a solution, and has asked the International Trade Administration Commission (Itac) to increase tariffs to 56% for imported leg quarters, which make up two-thirds of imports. This measure could boost local producers’ profits and prevent dozens more from closing down.

However, the Association of Meat Importers and Exporters is opposed to Sapa’s suggestion, saying a tariff increase could lead to as many as 15 000 job losses for those who cut, repackage and distribute imported products. Moreover, it would push up the price of chicken, making it less affordable for poorer consumers. The disagreement has yet to be resolved by Itac. “The intention is not to stop imports; it is to level the playing field,” says Kasselman.

Despite these issues, Kasselman remains optimistic about Grainfield’s prospects, saying it is looking to export its products in the near future. It supplies large wholesalers, including Pick n Pay, Shoprite/Checkers and Spar. “Everything goes in cycles so we are certainly looking forward to better times,” he says.