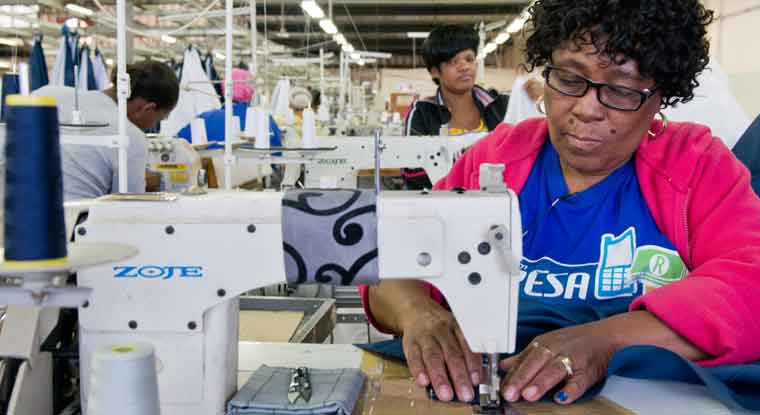 Mozimax is going full steam ahead, buoyed by funds from the IDC

When it comes to his business, there is a quote by which Mozimax owner and general manager, Paul Geldenhuys, abides: “A machine is only worth as much as it produces in a day.” It was not said by a famous businessman or a sage. Instead, these were the wise words of his mother.

The textile manufacturer in Tongaat, a town 40 kilometres from Durban, was close to shutting down business and laying off all 60 of its staff just a year ago, in 2012. But the words of his mother and the fresh ideas of his youthful management team helped Mozimax clamber out of the rut. The company not only survived, but grew as well. It now has 109 workers on the ground and has signed up Mr Price and Sheet Street as its biggest clients.

Geldenhuys says it was the tenacity and innovative spirit of the company’s young managers that kept Mozimax alive. “We have added tablecloths, runners, place mats and other products that are the brainchild of our young team.”

Management includes his son, Jonathan Geldenhuys, who took on the role of director during the crisis, accounts manager Tracy Shaw, and production manager Vanessa Coopasamy. Young talent coupled with the R14-million Mozimax received from the KwaZulu-Natal Industrial Development Corporation for working capital and new machinery is prompting the company to become more proactive. One indication of this is its plan to create a recognisable brand as Whiteheads and sell its products online.

South African textile manufacturers have not created brands for themselves and this has left a gap in the market, which Geldenhuys junior is willing to exploit. “We cannot be reliant on one or two big customers and the IDC. We also have to put ourselves out there. So we have to look at online markets and look at qualifying ourselves from a black economic empowerment point of view,” he explains.

Whiteheads will be marketed as a linen and drapery brand, and will be independent from its chain stores so as to prevent direct competition with them. “In Europe, you have Louis Vuitton making sheets, and everyone wants them. So why can’t we do the same?”

Five years ago, Geldenhuys senior bought out Whiteheads, a textile company founded in 1949, and started trading as Mozimax. But for the first four years of operation, the company did not have sufficient funds to turn into a fully fledged textile manufacturer. Instead, Mozimax could only cut, make and trim. The company only had 30 employees with Geldenhuys senior and Coopasamy as its managers.

When the provincial IDC approved the funds for Mozimax in 2012, the company finally had the capacity and freedom to expand its product line. Thereafter, it acquired retail giants Mr Price and Sheet Street as clients, supplying them with linen, drapery and tablecloths. “We cover a window, we cover a table, we cover a bed and we are starting to cover floors,” explains Geldenhuys senior.

Whiteheads was weavers and manufacturers of linen, curtains and tablecloths. “The weaving industry is pretty much completely flat because of imports,” says the younger Geldenhuys. Not many South African weavers exist today because shops buy cheaper cotton and are therefore selling goods at reduced prices. “For South African weavers, the cost of making goods is too high to compete with cheaper imports.”

Mozimax’s intentions to grow its client base and its Whiteheads brand are achievable, but will take hard work and innovation as the company has to compete against the massive imports of cheap Chinese, Indian and Pakistani textiles. The local industry, says Geldenhuys senior, was thriving until products from Asian markets started streaming in.

Because imports are cheap, Geldenhuys junior says they will not disappear. It is up to retail clients to decide how much imported and local goods they are willing to sell. “I think they will eventually swing majority to local. There are certain aspects where we try to push local in terms of quicker turnaround on products that are selling well.”

Despite this however, the elder Geldenhuys is certain Mozimax and the local textile industry is recovering. “We talk about the rand-to-dollar exchange rate being negative but it can be positive as well as it makes imports more expensive,” he points out.

Pat Moodley, the KwaZulu-Natal IDC co-regional manager, agrees, saying the chain stores’ latest buying trends indicate that they prefer locally made goods. “With the depreciation of the rand to the dollar, imports are becoming more expensive.”

Coopasamy says the products made at Mozimax are of a higher quality than cheaper imports, which could be the company’s biggest selling point. “The fabric, the machinery and the product itself are quality. And there is a lot more experience the workers have gained through the years which makes the quality of our product perfect.”

The American African Growth and Opportunity Act (Agoa) is to be renewed in 2015, which Geldenhuys senior thinks will not only be advantageous to his company but to the entire textile industry. When the US Congress first approved Agoa in 2000, textile manufacturers were expected to benefit the most. Though this has not been the case 13 years on – the motor industry is the greatest beneficiary – textile exports to the US have increased by 62%.

Moodley says that as a small company, Mozimax has the flexibility to explore new markets and introduce innovative products. It has already taken Moodley’s notion and put it into action. Besides creating a Whiteheads brand, the company is looking to manufacture lower-end drapery and linen, to appeal to the majority of South Africans who cannot afford expensive products. It will also cement ties with two more national chain stores before targeting the hospitality industry. “If we get our footprint throughout the country, then Whiteheads can become part of that whole gravy train,” says Geldenhuys senior.

Its branding strategy also ties in with his plans to expand business to the rest of Africa, which he says is lucrative at the moment. “It is on everyone’s lips. If we do not jump on this opportunity within the next 12 to 18 months we will have lost it.”

Mozimax has aligned itself with Chinese clearing agents that are influential in Africa. “They export a lot to Africa and import a lot of stuff that goes to the East,” he adds.

The company is intent on increasing its managerial workforce to cope with these new endeavours. It is seeking two more salespeople and two more operational co-ordinators. With all these plans soon to be implemented, the younger Geldenhuys cannot help but feel optimistic about Mozimax’s future. “We do have buying power and our economy is growing slowly so we will get there eventually,” he says.