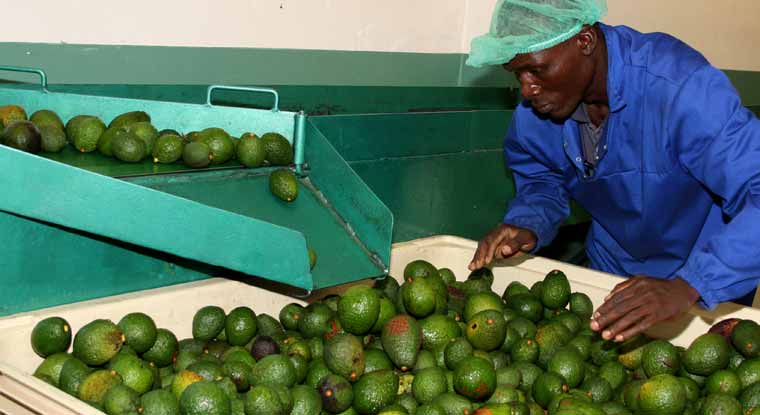 Limpopo could easily be called South Africa’s Garden of Eden, thanks to its abundance of tropical and subtropical fruit such as bananas, litchis, pineapples, mangoes and pawpaws. One of the crops that has the most reach, however, are avocados.

Westfalia tells a success story when it comes to growing, packing, ripening, marketing and distributing the delicious green fruit globally. Zac Bard, the managing director of the company, explains: “Part of the HMH Group, we are a forward-integrated agriculture business that specialises in avocados, from the development of superior, disease-resistant rootstocks right through to the presentation of perfectly-ripened fruit to the retail sector. Our focus is on the year-round supply of avocados, which we achieve through careful management of our own global resources and via our well-established supply partnerships.”

Around 15 years ago, Westfalia had 1 200ha of avocados in the sprawling hills of Tzaneen that grew avocados mostly for the European market. Things have changed dramatically in the past decade-and-a-half. “We have integrated forward into our key markets by establishing sales offices as well as ripening and packing facilities in the UK, France and the Netherlands. Ongoing expansion within these operations enables us to grow in unison with market demand.”

A significant challenge for operators in this sector is that fruit, by its very nature, is a seasonal product. “When you market to people in Europe they don’t care about seasons; they want avocados all year round,” Bard points out.

But it also works in Westfalia’s favour: by supplying retailers all year round, the company remains in constant dialogue with its customers, responding to their unique requirements, which in turn makes it less likely they’ll turn to another brand.

Westfalia manages about 1 800ha of avocado orchards in southern Africa, to produce some five million cartons of avocados every year. It grows Hass, Fuerte, Ryan and several other varieties of avocado. “The avocado calendar year starts on 1 October with Israel, Spain and Chile in South America. Between the end of their season and the South African season, there is a gap which needs filling. This is where we as a company growing in Southern Africa (for example Mozambique), and South America in the near future, will be able to fill that gap.”

Recent developments in South Africa have also focused on closing the window of supply on the growing South African avocado market. New plantings on Gem, a new cultivar of avocado that has been commercialized by Westfalia, will decrease the dependence on imported products during the South African off season. This project, in addition to decreasing the requirement for foreign exchange for imported products, has created jobs within South Africa.

In South Africa, the popular green-skinned cultivars such as the Fuerte, Pinkerton and Ryan, are available from March to October, and the nutty-flavoured, dark-skinned Hass is available from April to November.

The company markets and sells avocados grown by other farms and companies in Peru, but it is looking at expanding its own orchards in that country and Colombia. Only about 30% of Westfalia’s supply worldwide is from South Africa. The company supplies avocados to over 40 countries. “The model going forward is for us to not only market avocados from other countries but to also have a flag on the ground in key countries by having our own farms there, because chain stores are always looking to get supply from source,” Bard says.

And wherever it goes, Westfalia will continue to follow the same principles. “The legacy of our founder Dr Hans Merensky will always be the guiding light of our operations, and is evident in our environmentally sustainable, scientific methods of farming as well as the development of our people around the farms.”

Company in the community

Westfalia employs 800 permanent staff and another 1 200 workers seasonally. “We employ people from the region and strive to improve their quality of life and that of their families. Overseas customers hosted on our farms, were so impressed with our community projects that they committed millions of rands to help fund worthy projects planned for implementation within our communities.”

Support from the Waitrose and Albert Heijn Foundations has assisted Westfalia in purchasing vehicles to transport workers and their dependents safely between their homes and places of work or care. The company also established a community hall, as well as a wellness centre and for workers and a crèche for their children.

“Additionally, we built a resource centre next to a local state school which historically recorded very low matric pass rates. Since the pupils gained access to computers and other study resources at the centre, the pass rate has increased from 29 percent to 68 percent.” Westfalia has also upskilled 150 of its workers with an eight-month training course in garment making, while 180 pupils – workers’ children – were sent on technical skills training courses for six months.

Plans for the future

Westfalia is seeking to expand the brand internationally to close the supply window. “We are looking at production in Peru and Colombia,” says Bard. “The climate there is ideal for avocado growing and the time of the harvest is during January and February. This is perfect for us to close that supply window.”

Unlike citrus fruit, which tends to be recognised worldwide, there are places in the world where people have never seen an avocado, he says. But Bard holds that the avocado has so many good qualities it can be marketed worldwide.

To ease the burden on its workers, the company provides free crèche facilities and highly subsidised clinic and medical facilities.

Sizwe Magagula, Westfalia’s human resource manager and social responsibility facilitator, explains: “We provide primary and preventative health care to employees and their families. Between 350 and 500 patients are seen on a monthly basis.

“The wellness centre employs a full-time nursing sister and two nursing assistants. They are trained in first aid, HIV/AIDS testing and counselling.”

Westfalia’s crèche provides safe and reliable daycare for children aged between three months and five years. They receive two nourishing meals a day, with additional fruit and sandwiches served in the afternoon.

The company has a long-standing relationship with the IDC that began in 1997. “In recent times we wanted to expand, but we needed finance. The IDC provided a R12-million facility in 2011 to establish another 143 hectares of avocados,” Bard explains. The IDC has been an excellent partner in developing and growing the business in the past. With continuing support, the business can expand in South Africa and Southern Africa to the benefit of the region.