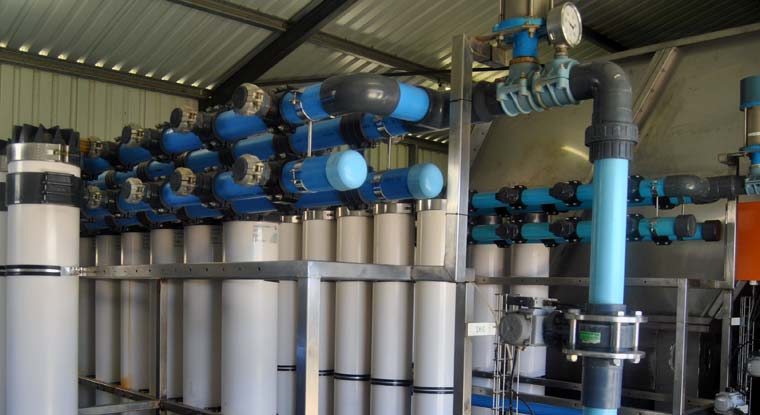 Ikusasa – works in the fields of water purification and desalination

Ikusasa Chemicals ticks all the boxes for the Industrial Development Corporation, slotting right into the corporation’s mandate of job creation, youth skills development, entrepreneurship, and rural infrastructure expansion. It is also working on building its components locally, meaning it will fit the buy South African profile as well.

The company works in the fields of water purification and desalination, essentially using membrane ultra-filtration (UF) to turn dirty, undrinkable water into potable water for rural regions. It also has a desalination plant in Sedgefield, on the Western Cape’s Garden Route. Membrane UF is a deceptively simple, mainly mechanical solution to a complex socio-economic problem: how to provide drinking water to people on a large scale at a reasonable cost, who are not on the national distribution system.

“We take water from rivers, but can also use surface water and underground water, remove the acids and impurities, and out the other side comes pure, clean water,” explains Andrew Theunissen, the company’s chairman. Theunissen has a background in explosives, and has worked closely with his partners since the early days at university.

Those relationships are still strong, particularly when it comes to training and research and development, and the company is also working with Mintek to manufacture membranes locally – at present the company imports its membranes from Germany. “We are just ironing out some issues and hopefully we will be able to produce our membranes locally, for South African conditions,” he says. This should lower the costs of setting up a plant.

Theunissen bought his membrane technology from the Water Research Commission in 2010, after starting the company in 2008. It has 15 plants, mostly in Western Cape – in Caledon, Agulhas, Swellendam, Mossel Bay and Port Elizabeth in Eastern Cape, as well as one at a Limpopo school set up in partnership with Belgian experts, among others. Through these, the company supplies drinking water to municipalities and water boards. “Our biggest project is being constructed in Overstrand; it must be finished by the end of June.”

Ikusasa water is used either as a pure source of water, or it is blended with municipal water to raise the overall quality of the latter.

Theunissen points out that the company works mainly in rural communities, helping poor people. And help them it does: its process not only removes particles, it also removes micro-organisms and disease-causing bacteria, and sets the pH to the correct levels – and it’s a mainly mechanical process that has little chemical intervention.

Ikusasa, which means “the future” in the Nguni languages, is based in Stellenbosch, although it has a factory in Somerset West. “We are looking towards the future. The next step is to expand. We intend to focus on Western Cape. In the medium term, we will expand into Eastern Cape. Long-term, we are looking at the rest of South Africa.

“Our growth will be in water, but for growth we need cash. In our business, the capital outlay is big. Up until now, we have been using our own capital, but this has all been eaten up,” he explains. “We have now formed a new partnership with the IDC, and the funds will be used to run the business as well as expand it.”

To be successful, he points out, a business needs all the building blocks to be in place. “I think we’ve got them, but there is still some way to go before we are making a profit.”

There are 23 staff members in total, with a strong focus on education and training. The company has set up a training centre with the University of Stellenbosch for all membrane technologists. This is expected to raise standards and improve skills in the field as a whole. Most of the staff are sourced in the area in which the plants are installed. Others are engineers and technicians from universities. Given this, many of the staff are highly skilled; others are trained by the company to be process controllers. Essentially their jobs are to maintain the plant and regularly test the water.

“We are in it for the long haul. It is our passion.” He believes membrane UF is the future. The technology can take out impurities that conventional sand filtration plants cannot, such as bacteria and viruses. Besides financing – setting up a small plant costs more than R5-million, and the membranes only last four to five years before they must be replaced – the real challenge is that South Africa is several years behind the rest of the world.

“Another challenge is securing our membrane partners, and to make a cheaper, more effective, longer-lasting membrane. At the moment it is cheaper to import the products. A long-term plan is to form an association with one of the mass producers in Germany or South Korea to make the membranes in South Africa under licence. This will have a cost benefit.”

In another nod to the future, Ikusasa invites schools to visit its plants, where it hopes to inspire local children to become interested in science and technology. Venise Lutz, a process controller at the Vaandrigsdrif plant outside Swellendam, would one day like to be the person taking children on these tours. “But I am still too shy,” she says demurely.

Vaandrigsdrif is owned by Overberg Water, but half of the plant is run by Ikusasa, which has four staff members living on site. Water from the Riversonderend or Theewaterskloof Dam release is pumped into the plant, where it is filtered twice, says Dr Ian Goldie, the business manager. A doctor of chemistry, he explains that a flocculent, aluminium sulphate, is added to the water. This gathers the impurities together. It is pushed through the membrane UF, removing these particles, and 1.2 megalitres of water is supplied into the distribution system every day.

The numbers are overwhelming: “There are 28 membrane filters, with space to double capacity. The surface area of small filters is 7m2, and of large filters is 30m2. About a thousand litres of water runs through each membrane an hour, and the plant runs 24/7.”

Lutz has worked at the plant, where Ikusasa adds its water to the municipal system, for seven months. “It is going very well,” she says. “I enjoy the work. I test the water and manage the plant.” Prior to this job, she was employed at Overberg Water for four years, inspired by her father, who has a superintendent at the Caledon Overberg water plant.

And in the long-term her plans are “to be the chief executive”. “Every day I learn something new, and I earn enough to look after my one-year-old son. I want to get into more training of children, and to learn more – and Ikusasa is willing to support me,” she smiles.