Ways for African and Asian development finance institutions (DFIs) to work together to finance disadvantaged farmers and small and medium enterprises (SMEs) on the two continents were the topic of a discussion held as a prelude to the first Joint CEO Forum. 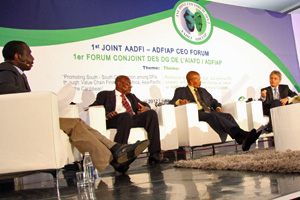 The first part of the discussion was entitled “IDC Dialogues”, taken from a CNBC Africa television programme. It focused on how the two associations could enhance south-south co-operation among DFIs, and the strategies needed to advance this co-operation. This part of the discussion, which was held at the Indaba Hotel on 14 November, featured the chairperson of ADFIAP, Datuk Wan Azhar Wan Ahmad; the vice-chairman of AADFI, Adebayo Jimoh; and the Industrial Development Corporation CEO, Geoffrey Qhena.

Datuk Wan Azhar said that since the signing of a memorandum of understanding between AADFI and ADFIAP in 2010, much work had been done between the two associations in terms of identifying areas of co-operation. “Our presence here today demonstrates this partnership. There have been two years of planning and identifying short-comings in our different associations.”

Even though there were similarities between the two associations, they had a lot to learn from each other, he said, adding that an area ADFIAP’s African counterparts could replicate was using a guarantee mechanism in their lending policies, instead of collateral.

Explaining the reasoning behind this, Datuk Wan Azhar said most small farmers and SMEs had no collateral to offer when taking out loans. They only had a guarantee of their years of experience in their respective sectors to show what they were capable of doing. “As DFIs, we can substitute lack of collateral with this guarantee,” he said. 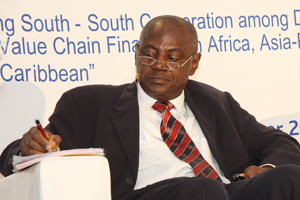 Jimoh said the signing of the memorandum of understanding had opened up a lot of action in Africa. Subsequent visits to South Korea and India also gave African DFIs a chance to see how their Asian counterparts were managing and regulating development finance activities.

“It’s a wonderful relationship. We are currently exchanging information with our counterparts and this knowledge broadens the scope of institutions.” He said the major objective of the partnership was to develop a “rural setup”. “The visit to India assisted [AADFI] to understand how the rural setup can be managed.”

It was important for developing countries to exchange ideas, according to Qhena, who said the study tour to South Korea was “an eye opener”, even though the two continents had a lot in common. Looking at specifically at SMEs, Qhena said the trip to South Korea showed how DFIs in Asia had made strong inroads in developing this sector, something which African DFIs had to rectify.

In Africa and Asia, there were farmers and SMEs located far away from urban areas where they could more easily get information about funding. Jimoh said AADFI was assessing lending processing that would lead to better use of funds by recipients, both small farmers and SMEs. However, he noted that many far-flung farmers and SMEs in Africa were constrained by lack of infrastructure and lack of understanding of markets. Adding to his sentiments, Qhena pointed out these farmers and SMEs could thrive if the right support was provided and the market understanding was addressed.

The second part of the discussion focused on how governments could help create conducive environment for DFIs to operate and SMEs to grow. Development Bank of Southern Africa’s CEO, Patrick Dlamini; ADFIAP’s secretary-general, Octavio B Perelta; and the managing director of IDB Capital Limited, James Karanja, were on this panel.

Perelta said there was growing realisation among Asian governments that DFIs were an important player in the economy. “Government support is critical for DFIs to do their job well, especially in areas of funding, policy formulation, support, advice and linkages,” he said.

SMEs in Africa needed all the support they could get from all levels, be it technical support, guidance or facilities so that they could grow and operate at a sophisticated level, according to Dlamini. “SMEs play a critical role in creating economic opportunities but we have come short in Africa in terms of SME growth. We have challenges of poverty and high borrowing costs.”