With funding from the Industrial Development Corporation, South African Calcium Carbide, one of SA’s leading energy-intensive companies, develop an 8MW co-generation facility with GreenEng. SACC is Africa’s only producer of calcium carbide, a product used in the desulphurisation of steel. 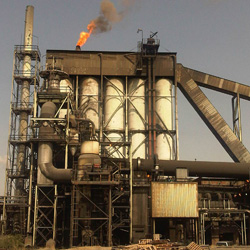 The recent increase in electricity tariffs is certain to affect margins for energy intensive companies. While some firms are prepared to absorb the financial impact of increased electricity costs, some are opting for cheaper alternatives that will in the long-term be able to sustain their revenue momentum.

With funding from the Industrial Development Corporation (IDC), the South African Calcium Carbide (Pty) Ltd (SACC) is one of SA’s leading energy intensive companies that have opted for the later. SACC will use funding from the IDC to develop an 8MW co-generation facility with GreenEng.

SACC is Africa’s only producer of Calcium Carbide and this product is used in the desulphurisation of steel, and in the production of Acetylene. Acetylene is mainly used in the welding industry.

Says Siracusano: “We buy raw materials from local suppliers that in turn have created jobs in their communities so the sustainability of our company is critical to preserving jobs within these communities.” However, it’s the planned co-generation plant facilitated by the IDC that has excited Siracusano the most.

Electricity costs account for the bulk of the company’s production costs and without the program, SACC could have seen a huge surge in production related costs following power utility Eskom’s recent tariff hikes.

SACC currently accounts for approximately 50% of the electricity that Eskom supplies to the Newcastle region. Another significant spinoff from the planned Co-gen facility is the fact SACC will be spared from Eskom’s forecast national deficit of 1000MW in 2012/13.

Implementation of the Co-gen facility will have a positive developmental impact on sustainable employment in the area that will result in creation of 100 new temporary jobs during the 18-month construction phase and 6 new permanent jobs during the operational phase.

“The fact that more jobs will be created during the construction phase of this project motivation to the (IDC) and for us these are the kind of projects we are keen to fund,” says Van Tonder.