A nature reserve in Limpopo has been transformed into a pioneering example of a sustainable eco-tourism destination – thanks to finance from the Industrial Development Corporation. 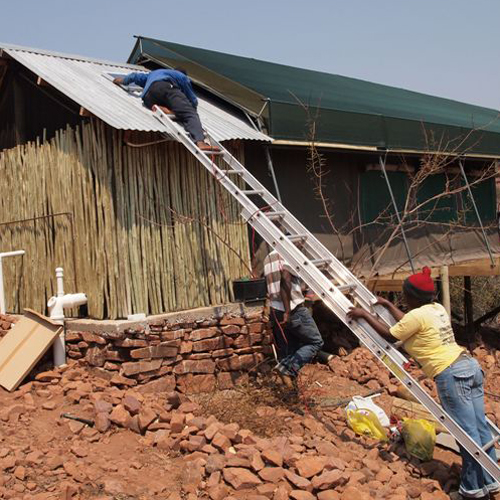 A nature reserve in Limpopo, Tshulu Camp, has been transformed into a pioneering example of an eco-tourism destination that is sustainable in every aspect – infrastructure, use of energy and operations – thanks to an Industrial Development Corporation’s social investment grant.

Tshulu Camp, owned by the Tshulu Trust, aims to help communities living in the area of HaMakuya in Venda to use their natural and cultural resources to achieve sustainable livelihoods.

The upgrade has changed a struggling eco-tourism project into one which already has enough bookings to cover its costs for the rest of 2011. New tourists include organised birding groups, among them two international birding operators.

The showpiece of the camp is the EcoHouse, a 90m² bungalow that sleeps six people, with an internal bathroom, outside shower and spacious kitchen. Features include thick, thermally efficient rammed earth walls; solar lighting; a living roof; and a natural air conditioning system based on evaporative cooling.

To build it, consultant Paul Marais of the green construction company Simply Sustainable trained 10 local residents in a range of processes, including ways to work with stone and how to make rammed earth walls. These are valuable skills, in short supply in South Africa.

A local welder was taught how to make ram pumps, two of which were installed in a nearby river to upgrade the camp’s water supply. Ram pumps can be constructed for as little as R1 200 per pump for materials, giving them considerable potential in poor rural areas. It is hoped that a micro-enterprise might be created around the construction and installation of these pumps.

“We aim to make Tshulu Camp a demonstration site for eco-building, sustainable energy and other eco-friendly innovations,” says Dr Lara Allen, programme manager for the Trust.

“Our approach has been to get double business enhancement value from the funds provided by the IDC by making the way we build an attraction in itself.”

It is happening: Tshulu has been chosen by the environmental NGO 90 by 2030 as its rural partner to demonstrate carbon mitigation technologies. Parabolic solar cookers, energy-saving rocket stoves and wonderbags, which use solar power to cook rice, will be installed at the camp and five area schools.

A portion of the IDC funds went for the installation of electricity as well as wireless internet infrastructure based on cellphone technology. As a result, the nearby Tshikondeni mine has committed to offer the camp as an option for official visitors, and the camp can accommodate conferences.

The eco-house was not the only improvement funded by the IDC at Tshulu Camp. Among other green improvements: replacement of a faulty septic tank with a hygienic aerobic septage system called a forest floor filter, which works like a reed bed; the extension of roads and paths; and the digging of 2km of trenches to install services.

The IDC’s involvement with Tshulu is part of its corporate social investment.